(The following is a guest post by Francesco Belfiore, a PhD student at Cambridge University’s Kavli Institute for Cosmology, and summarizes his recent paper, which uses preliminary MaNGA data to map gas ionisation in several galaxies.)

Galaxies have long been considered island universes. Ordinarily separated by huge cosmological distances (of the order of millions of light years), most galaxies are not interacting in any visible way with their environment. However, modern theories of galaxy evolution claim otherwise. Starburst galaxies (galaxies which are experiencing a rate of formation of new stars much higher than normal) are known to expel large amounts of ionised (and possibly also neutral) gas towards the intergalactic voids. Supermassive black holes, which we believe to live in the centres of most galaxies, can also give rise to powerful outflows during periods of accretion (when the black hole has “switched on” and is feeding on the surrounding material). Some of these events are violent enough to totally strip a galaxy of its fuel: the gas. Without gas, a galaxy loses its ability to form new stars and becomes progressively older. In a sense, the galaxy has “died”.

This is not the whole story, however.

Statistical studies of large sample of galaxies, like SDSS, have demonstrated that outflows are not enough to make sense of the observed properties of galaxies. We also need a process to keep galaxies alive: the inflow of new gas. Indeed, our best attempts to simulate the Universe on a computer have shown that large amounts of gas must reside in intergalactic structures, known as the “cosmic web”, because of its resemblance to a spider’s web (or to swiss cheese). Our most sensitive telescopes cannot yet detect the gas in the cosmic web. However, we may be able to detect its effect on galaxies, because this fresh fuel should have a dramatic effect on the ability of galaxies to keep forming new stars.

Understanding the details of how gas simultaneously forms new stars and flows in and out of galaxies is one of the scientific goals of the SDSS-IV MaNGA (Mapping Nearby Galaxies at APO) survey. MaNGA is an integral field spectrograph, an instrument capable of taking spectra of galaxies across their whole extent. In MaNGA we do this by building bundles of optical fibres, which are optimised in size to fit the size of different galaxies on the sky. In January 2013, the MaNGA instrument saw first light at the Apache Point Observatory and some prototype observations were taken. These observations (which we will call P-MaNGA, to highlight their prototype nature) are lower quality than the MaNGA survey data, but have been very useful to improve the instrument, software and observing procedure. Moreover, they have given us a real chance to test some of our ideas on real MaNGA-like data.

We have published 3 papers based on this data (Wilkinson et al. 2015, Li et al. 2015 and Belfiore et al. 2015). In Belfiore et al. 2015, we have looked at the properties of the ionised gas in MaNGA galaxies, and we have not been left short of surprises! It turns out that, while some of the gas is consistent with being ionised by young stars, and thus traces recent star formation, a large number of regions in galaxies also show the presence of ionised gas, but no young stars. This effect had been observed before, but it was really striking to see this effect at play over large regions of MaNGA galaxies. This low-ionisation state gas (usually referred to a “low-ionisation nuclear emission line regions,” or LINERs) has puzzled astrophysicists for more than 30 years now. There are still many things we do not know, or for which we only have partial answers: Why are these LINER regions not forming stars? What is the “lamp” illuminating–and thus ionising–the gas? How do the properties of LINER regions compare with those of star forming regions?

Using the P-MaNGA observations, we have separated the LINER emission from the the emission due to star formation across different galaxies, and we have argued that LINER emission is likely due to ionisation from hot, evolved stars. In the illustration below, you can see one of the P-MaNGA galaxies we have observed. On the right, you see how the galaxy appears in broadband colour (the image is from the legacy SDSS photometric survey!), while in the middle you see the emission due to one of the transitions of ionised hydrogen (called H-alpha). In the right image you can see a rough division of the galaxy into regions forming stars (blue) and regions classified as LINERs (orange). So overall this galaxy does form stars, although the central regions (which using MaNGA data can be shown to be older), is basically “dead”.

Why is this the case? It seems that the culprit is not an active galactic nucleus, but a more detailed answer to this question will need to wait for MaNGA survey data. When we started P-MaNGA, almost two years ago, we only had a handful of galaxies, as shown in the next figure. With one year of successful survey observations, and approximately a thousand galaxies already observed to date, MaNGA is well under way to its goal of ten-thousand galaxies. Stay tuned for further developments soon! 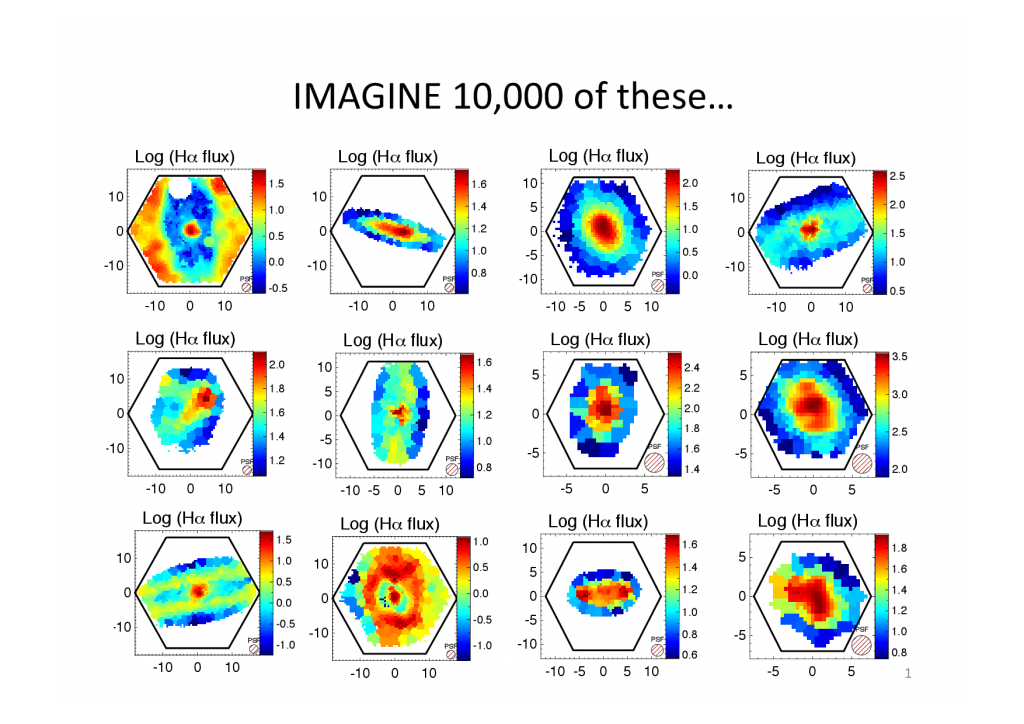