Astronomers have always been fond of the Milky Way, after all, it is our home. But it’s more than just our home, it’s also our most important laboratory for studying galaxy evolution. We can study the Milky Way in tremendous detail, compared to any other galaxy. So what does our host galaxy tell us about galaxy evolution?

Let’s start at the very beginning (as Julie Andrews said, “a very good place to start”). I literally mean the very beginning: the Big Bang. While the “bang” itself was perhaps the most exciting event in cosmic history, the aftermath of the Big Bang was really rather dull. After the Universe calmed down a bit, all of existence was just endless clouds of gas; Hydrogen and Helium gas to be precise. No stars. No galaxies. Certainly no planets or life.

But fortunately this boring state of affairs quickly corrected itself. As gravity took over, gas began to collect into what would become galaxies. As the gas collected, it slowly became dense enough to form the first stars. Stars are very exciting. In their hot, dense cores, they fuse Hydrogen and Helium into the heavier elements (Carbon, Oxygen, Iron, etc.) that we’re all more familiar with. And when they die, they often die spectacularly in supernovae.

Star deaths are particularly important to our story because that’s how heavier elements (everything besides Hydrogen and Helium) are released into a galaxy. But death is not the end! There’s still plenty of gas in a galaxy, so it forms more stars, now with a slightly higher concentration of heavier elements in them from the previous generation of stars. This is the life-cycle of a galaxy: make stars, become enriched by dying stars, make more stars, repeat. Galaxies aren’t homogenous blobs though: they have interesting structure such as spiral arms and central bulges. Due to the effects of gravity, their mass tends to be more concentrated at their centers. More mass means more stars. More stars means more heavy elements enriching the gas in that part of the galaxy.

A simple illustration of the build up of heavier elements in a galaxy (credit: ESA/Hubble & NASA).

The Apache Point Observatory Galactic Evolution Experiment (APOGEE) has made measurements of the chemical enrichment (Fe/H) of over 200,000 stars to date. But this is only half the battle. To measure the Galactic metallicity gradient, distances from the center of the Galaxy are needed as well. This might seem easy: measuring distance from the Galactic center is a simple geometry problem, if you know exactly where the object you’re measuring is. Unfortunately, finding the distance to celestial objects can be difficult.
There are a variety of methods for finding astronomical distances, but almost all of them focus on finding the actual intrinsic brightness of an object. Since brightness decreases predictably as we move farther from an object, a change in brightness (intrinsic – observed) must correspond to a certain distance. Of course the observed brightness is very easy to measure! Finding the intrinsic brightness is the focus of entire sub-fields in astronomy.

The perfect measuring stick for studying the galactic abundance gradient will then have both (relatively) easily measured chemistry and a measured reliable distance. Among the best objects fitting this description are open star clusters. Open clusters are large groups of gravitationally bound stars (meaning they’re very close together) that formed at the same time, from the same material. Remember when we discussed stars forming out of gas? Most of these gas clouds are massive (millions of times the mass of our Sun), and thus can produce tens or even hundreds of thousands of stars. The resulting stars tend to remain gravitationally bound in an open cluster. 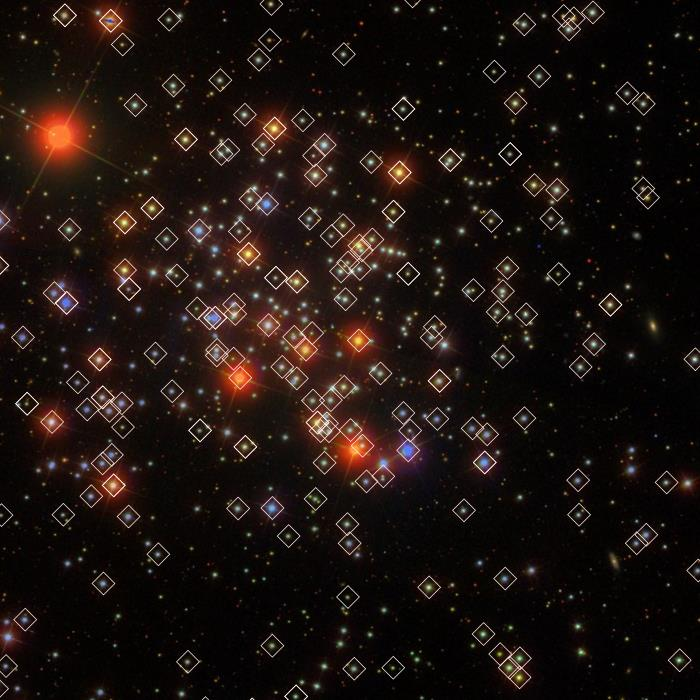 The open cluster M67, with all the stars observed by APOGEE boxed. (Credit: SDSS)

Open clusters have a number of useful properties. Since all of the stars formed from the same cloud, they all have approximately the same chemical makeup. They are also all approximately the same age (give or take a few million years, but that’s a cosmic eye-blink). These two properties make open clusters particularly easy to model. The models predict both intrinsic and easily observable properties of the cluster (e.g. observed brightness and color patterns), so to determine the intrinsic properties of an open cluster, we only need to find a model that matches it well. With an intrinsic brightness, we can quickly calculate the distance to an open cluster.

The OCCAM survey relies on the fact that cluster member stars are gravitationally bound. Gravitationally bound stars move through the galaxy together and thus will have similar velocities when measured from Earth. The OCCAM survey combines line-of-sight velocity measurements (Doppler Velocity) from APOGEE with measurements of velocity perpendicular to the line of site (proper motion) from the recent Gaia Data Release 2 to isolate cluster members from non-members.

With uniform APOGEE chemical measurements from member stars in many open clusters, and distance measurements obtained from modeling the open clusters, we can finally measure a high precision Galactic abundance gradient that will be used to calibrate models of galaxy evolution. And that’s one more piece in the puzzle of how our own Milky Way formed and evolved.