This is a guest post by David V. Stark (Kavli Institute for the Physics and Mathematics of Universe, University of Tokyo).

The SDSS-IV MaNGA survey is providing the most comprehensive census of the stellar and ionized gas content of local galaxies to date, but there is another major component of galaxies the SDSS telescope does not see: the cold gas. Cold gas plays the key role of fueling the formation of new stars. Galaxies with ongoing star formation tend to have lots of cold gas, while those with no ongoing star formation have very little cold gas. Figuring out how and why galaxies acquire, consume, and/or lose their gas over time is fundamentally important to our understanding of galaxy evolution as a whole.

Typically, the largest component of cold gas within galaxies takes the form of neutral hydrogen atoms floating around at very low densities. In the astronomical community, this component is referred to as HI (which in this case is not an enthusiastic greeting, but is rather pronounced “H one”). Our ability to see HI is thanks to a very small transition within hydrogen atoms where the proton and electron go from spinning in the same direction to spinning in opposite directions. This “spin-flip” transition releases a tiny amount of energy in the form a electromagnetic radiation with a wavelength of 21 centimeters. Such a long wavelength lies in the radio regime of the electromagnetic spectrum, so is invisible to optical telescopes like that used for the MaNGA survey. Thankfully there are radio telescopes specifically designed to detect this radiation.

The HI-MaNGA survey led by Professor Karen Masters and myself is an ongoing observing program to measure the HI content of MaNGA galaxies using the 100m Green Bank Telescope (GBT). Located within the Radio Quiet Zone of West Virginia, USA, the GBT is one of the world’s premier radio telescopes, and its large collecting area and “quiet” surroundings makes it an excellent tool to measure the faint 21cm emission from MaNGA galaxies that lie as much as hundreds of megaparsecs away. 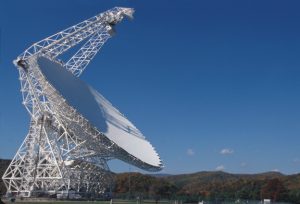 The GBT cannot provide pictures of MaNGA galaxies in the same way as optical telescopes, but rather acts like a spectrometer with a single spatial pixel that measures all the emission from an area on the sky that is about 270 times larger than a single fiber in the MaNGA IFUs. So while we do not map the HI within galaxies, we do measure the integrated radio spectrum emitted by each galaxy. From this spectrum we can measure two fundamental properties: (1) The total amount of light emitted at 21cm, which is directly proportional to the amount of HI gas, and (2) the spread of the 21cm emission line, which reflects a galaxy’s rotation speed and can be used to place crucial constraints on the total enclosed mass (stars, gas, and dark matter). 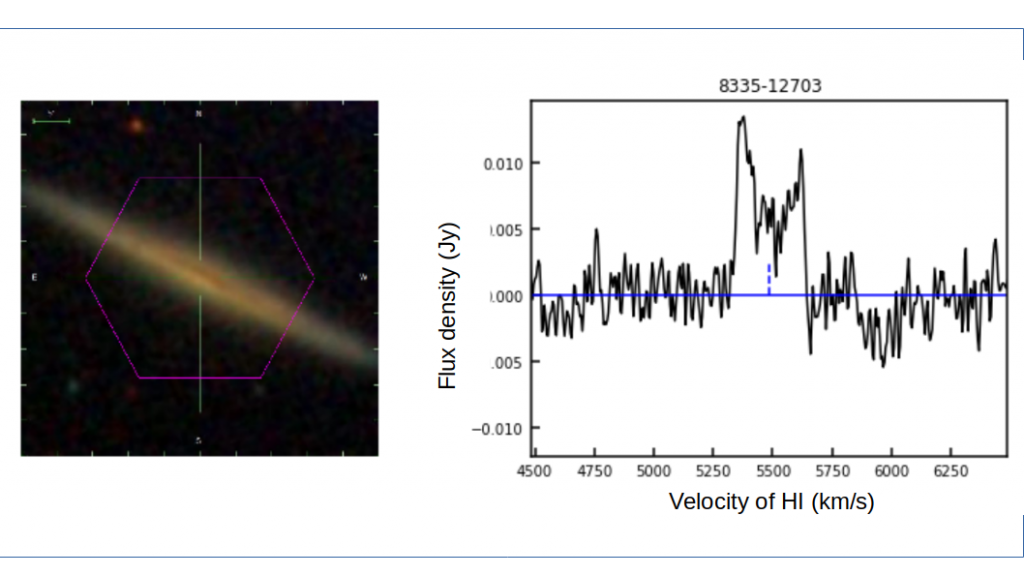 (left) A MaNGA galaxy with the IFU bundle shape overlaid in purple. (right) The GBT spectrum for this galaxy showing a clear detection of 21cm emission. Wavelength has been converted into recession velocity using the Hubble Law . The total area under the emission line is directly proportional to the total HI present in this galaxy, while the width of the emission line indicates this galaxy’s rotation speed. Figure taken from Masters et al. (submitted).

Data for the first 331 galaxies from HI-MaNGA has been released as a Value Added Catalog in SDSS Data Release 15, with both the processed radio spectra and derived properties made available. This first release is just a taste of what is to come; additional data has been collected for over 2000 additional MaNGA galaxies, and observations are continuing as we speak. This work would not be possible without the amazing team of undergradute and graduate students who have helped with, and continue to help with, observations and data reduction: Zach Pace, Frederika Phipps, Alaina Bonilla, Nile Samanso, Catherine Witherspoon, Catherine Fielder, Emily Harrington, Shoaib Shamsi, Daniel Finnegan, and Lucy Newnham.

Stay tuned for a lot more data and a ton of interesting science!