As frequent readers know, the SDSS-IV-MaNGA survey plans to obtain spatially-resolved spectra of somewhere in the neighborhood of 10,000 galaxies using a technique called integral-field spectroscopy (or IFS). IFS essentially relies on placing an array of fiber-optic cables over an object of interest in the sky, and using the fiber-optics to pipe the light into a spectrograph, which produces the useful data by breaking up that light into its constituent wavelengths (an easy way you can do this at home is with a glass prism). The array of fibers is nicknamed a “bundle,” which is a pre-packaged grouping of fibers that we know the arrangement, and packaging the fibers allows more observational efficiency, since we don’t have to re-position the telescope to make a measurement of the same galaxy at a slightly different point.

However, the specific design of the fiber bundles is an important problem.In a perfect world, we could design each bundle especially for the galaxy it was meant to observe, considering its size on the sky and its orientation with respect to our line of sight, but this is too time- and resource-intensive. Plus, with each reconfiguration of a bundle, it’s possible to over-stress the glass fibers, which causes a condition called “Focal Ratio Degradation” (sparing the gory details, if this happens, the fibers perform poorly and we lose information). On the bright side, it turns out that if we average the inclinations of all the galaxies in the nearby universe, a nearly-circular arrangement of fibers only wastes about 30% of the fiber real-estate. This is much better than rearranging bundles! What’s more, previous results have suggested we might be able to see gas outflows from nearly-edge-on, star-forming disk galaxies–so looking slightly off the disk might be good, after all!

Two possible fiber arrangements were considered for the design of the MaNGA bundles: the first relies on cladding each fiber in a thin layer of plastic and packing them closely in a hexagonal pattern; the second style (so-called “Sydney”-style, after its use in the Australia-based SAMI survey) strips all coverings from the fibers and arranges them in concentric circles. This allows better packing of the fibers, for more light gathered in total. You can see an illustration of those styles below. The instrument team ultimately chose the hexagonal arrangement, which conferred a number of important advantages:

But how exactly can we be sure that we are capturing all the galaxy’s properties, since about half of the galaxy isn’t on a fiber? Well, the observing strategy includes a process called “dithering,” a planned, regular offset in the telescope’s position. David Law’s observing strategy paper from earlier this year shows that by observing each galaxy three or more times (each observation being dithered in one of three directions on a 1.44-arcsecond equilateral triangle), all the gaps are filled in! 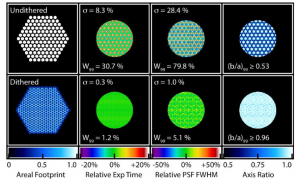 As an added bonus, the dithering process also gives us another way to improve MaNGA’s spatial resolution. Since all the light incident on a particular fiber is “mixed up,” our ability to resolve spatially-separated features within a galaxy is limited by the fiber size (the smaller the fiber, the better our spatial resolution). However, we can’t make fibers arbitrarily small: not only are small fibers difficult to make well, sampling the galaxy more finely means we have to observe for longer, so it’s a tricky trade-off. However, the overlap of the fibers from subsequent dithers lets us achieve a much finer sampling than what the fiber size alone might allow: we are able to get spatial resolution of about 2.5 arcseconds (sampled by spaxels – or spectral pixels – of 0.5 arcseconds on a side), from these observations with a fiber size of 2 arcseconds.

Stay tuned for more information about how MaNGA will use these spectra to do awesome science!