This post by Gail Zasowski is part of the SDSS Celebration of the International Year of Light 2015, in which we aim to post an article a month in support of the celebration of light.

It is increasingly rare for modern astronomers to work on “old” puzzles — that is, older than they are, or especially older than their advisors are. The last several decades have seen a huge advancement in our understanding of the Universe — we learned that stars evolve over time in predictable ways, that the Milky Way is one distinct galaxy among many, and that the Universe itself is expanding and even accelerating in size “outwards”. Very often, the questions that astronomers work on now are new questions that arise as other problems are answered, or as we build new telescopes and discover things that we didn’t even know we didn’t know about.

But there is one outstanding puzzle that has famously resisted an answer for nearly a century now. This mystery concerns a peculiar pattern of missing light arising from interstellar material — that is, from the giant clouds of dust and gas that lie in the vast distances between stars. These clouds contain atoms and molecules of all the elements that make up the stars and the planets and us — hydrogen, carbon, oxygen, and so on. They are 10^19 (that’s 10 000 000 000 000 000 000) times less dense than the air we breathe, but they are so huge that they contain enough atoms to add up to nearly 15% of the mass of the Galaxy! (Baryonic mass, of course — dark matter is a different story.) And now the SDSS has made some unique contributions to understanding the mystery in these clouds’ missing light. 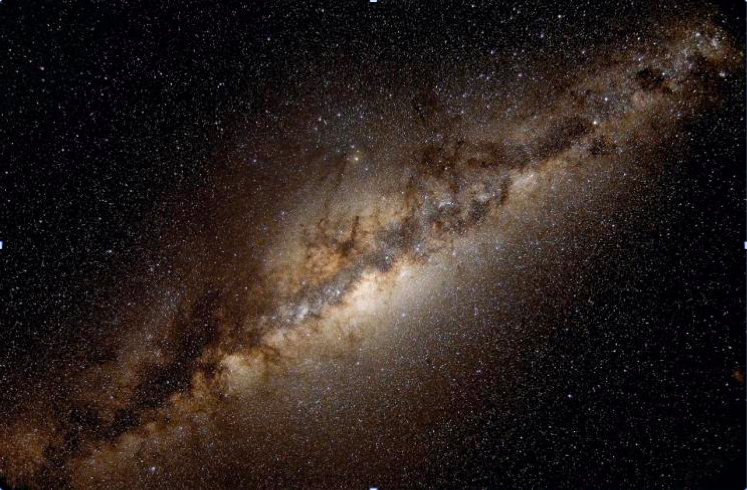 Some of the atoms and molecules in interstellar clouds emit light, like visible light or radio waves, that we can see with telescopes. But others don’t emit much light, and the only way we know they’re there is when they absorb some of the light of stars when the light passes through one of these interstellar clouds. Helpfully, each kind of atom or molecule absorbs only specific wavelengths of light, and we can measure these wavelengths in a laboratory to learn what the pattern is for each element or molecule. So when we look at the spectrum of one of these stars seen through a cloud, and we notice that some of the star’s light is missing, we can use the patterns of absorbed wavelengths to figure out what kind of atoms or molecules are in the cloud. For example, this is how we know that the clouds have elements like calcium and potassium in them1.

Okay, on to SDSS and the mysterious missing light! Way back in the late 1910s, astronomers started noticing some absorption patterns in their spectra that were very puzzling. They didn’t act like the patterns from atoms in the stars themselves, so they had to come from interstellar material. And they appeared in the spectra of stars all over the sky, so the material had to be something that was common. But they couldn’t figure out what the particles were! The patterns didn’t match those of anything we knew existed in interstellar clouds, or even anything we had measured in a laboratory.

Fast-forward nine decades, and the situation has progressed a bit, but not as much as one might expect. We now know of almost 500 separate absorption “features” (that is, wavelengths at which light is being absorbed by something), up from the original 2 discovered in the 1910s (Figure 2). We call all of these features “DIBs”, which stands for “Diffuse Interstellar Bands”2. We have determined that the DIBs are more consistent with being caused by molecules than by single atoms, and many people have theories as to which molecules those are. But it was just this year, in 2015, that scientists were first able to show conclusively that a particular molecule — the fullerene ion C60+ — is responsible for a particular DIB (actually, for four of them). The rest remain up for grabs!

Figure 2: The 400 strongest known DIBs. The y-axis shows the typical fraction of background light absorbed when there is enough interstellar dust to absorb almost 60% of the total visible light.

So where does SDSS come in? Well, proving that certain molecules produce certain DIBs requires a lot of equipment and a molecular spectroscopy laboratory, and that’s not really something SDSS is set up to do. But there’s another related puzzle — how are the molecules that produce the DIBs (whatever they are) distributed throughout the Milky Way? This is an important question, because the big molecules that are most likely to cause the DIBs are the kinds of molecules that contain a lot of the Galaxy’s carbon, which has an impact on things like the chemistry of newly formed planets. But because DIBs are generally only studied in small samples of stars very close to the Sun3, we didn’t have a good understanding of what the molecules were doing elsewhere in the Galaxy.

One group of SDSSers (led by Ting-Wen Lan, a graduate student at Johns Hopkins) tackled this issue by looking for the DIBs’ absorption signatures in optical SDSS spectra of other galaxies and quasars, seen through the Milky Way’s interstellar material. They had to be careful, because the galaxies’ and quasars’ spectra have absorption lines from their own stars and gas clouds, so identifying the weak features from the foreground Milky Way gas can be tricky. But the SDSS provides the biggest dataset available to look for DIBs: the team had so many spectra from SDSS-I, -II, and -III (almost 500,000 of them) that they could add many spectra together to boost the signal, and then map the DIB absorption strength on the sky (see the left side of Figure 3). Because they detected about 20 DIB features in each signal-boosted spectrum, they could also measure how each DIB behaves a little differently with respect to other interstellar gases, like hydrogen or carbon monoxide (Lan et al. 2015). This tells us that there isn’t one single molecule that can explain all of the DIBs!

However, the SDSS optical dataset doesn’t include any sources in the disk or inner parts of the Milky Way. This is because the interstellar material, which is concentrated in these parts of the Milky Way, is made up of not only gas particles but also dust grains (think of tiny soot particles). These dust grains block starlight, and block it much more than the DIB molecules do, especially at optical wavelengths. (Look back at the picture of the inner Milky Way in Figure 1.) So it is very hard to see any stars, galaxies, or quasars to use as “background” sources in which to look for DIBs.

Figure 3: Left: The strength of DIB absorption seen in optical wavelengths from SDSS background galaxies and quasars (Lan et al. 2015) and in infrared wavelengths with APOGEE (Zasowski et al. 2015). Click HERE for an interactive version of this map! Right: The motion of the APOGEE DIB molecules with respect to the Sun. Image credit: T. W. Lan and G. Zasowski.

And this is where APOGEE steps in. APOGEE is unique in the SDSS set of instruments because it measures light at infrared wavelengths. This kind of light is invisible to the human eye (we can perceive some infrared wavelengths ourselves, though we call it “heat”!), but it is very efficient at passing through some materials, including the interstellar dust that blocks visible light (Figure 4). This means that APOGEE is a great tool for measuring starlight — and the bits of it that get absorbed by the DIBs — very far from the Sun in the disk and bulge, where most of the stars and interstellar material are! 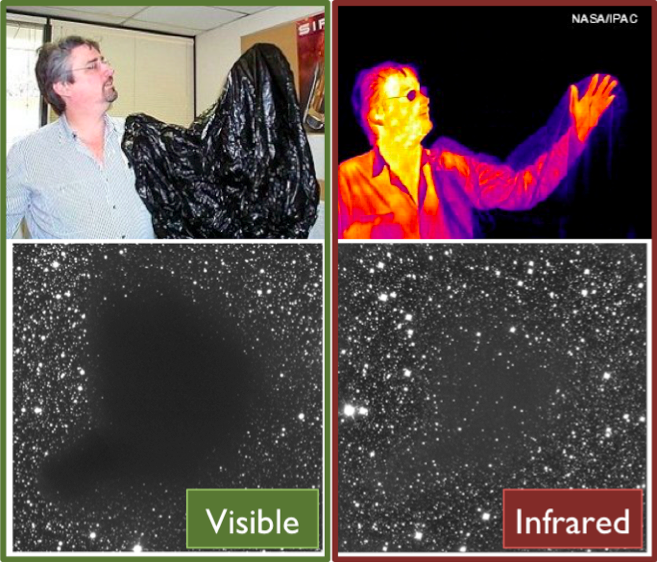 Figure 4: Looking at things with optical and with infrared light can lead to very different results! On top, a plastic bag is opaque to visible light, but it is translucent to infrared light from the man’s hand. On the bottom, a similar effect occurs in an interstellar cloud, seen with visible light (left), like our eyes, and infrared light (right), like APOGEE. Image credits: NASA/IPAC and ESO. See more optical/IR comparisons HERE.

So I (Gail Zasowski, a postdoc at Johns Hopkins) led a second group of SDSSers who focused on a single, particularly strong DIB feature that APOGEE could detect. My team measured this feature in front of about 70,000 stars in the APOGEE dataset (Zasowski et al. 2015a). Because most of these stars lie in the dustiest parts of the Milky Way, we were able to fill in the parts of the DIB absorption map that Ting-Wen’s group couldn’t reach with optical data (left panel of Figure 3). We also found that, unlike many of the DIB features at visible wavelengths, this infrared DIB does not disappear in cold, dense interstellar clouds. This behavior means that the APOGEE DIB can be used to measure the approximate amount of interstellar material between us and a background star, including the amount of interstellar dust that blocks so much of the starlight.

Even more excitingly, my team is able to use the DIB features we detect to measure the speed at which the clouds of DIB molecules are moving with respect to the Sun. We can tell that the molecules are generally rotating with the Galactic disk in the same way that hydrogen and other major interstellar components do (right panel of Figure 3).  Since most DIB studies in the past have looked at stars relatively close to the Sun, this is the first time this dynamical behavior has been observed in any sort of large scale way.

My group even found evidence for DIB molecules flowing in the gas surrounding the beautiful Red Square Nebula (Figure 5). This detection may help us identify likely candidates for the molecule itself (Zasowski et al. 2015b). 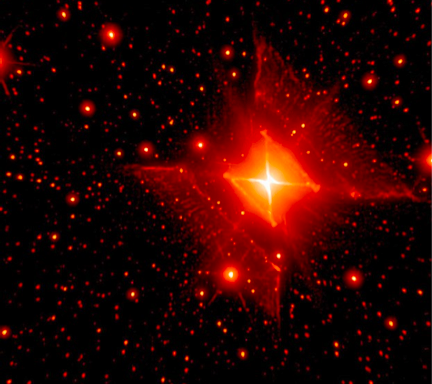 Over the last hundred years, astronomers have learned that there is a large reservoir of unidentified, complex organic molecules in the interstellar medium, seen only in the mysterious signatures they leave in the light of stars shining through them. The SDSS has given us the ability to use these DIB features — even without knowing exactly what causes them! — to map the distribution and velocities of these molecules in the big spaces between the stars.

1 Some elements are also traced through their light emission, instead of light absorption. This has to do with the more complicated physics that happens in clouds with different densities and temperatures. For more information, check out http://www.ipac.caltech.edu/outreach/Edu/Spectra/spec.html, or search for “astronomical spectroscopy” online.

2This term refers to three facts about these features. Many of the features at optical wavelengths appear strongest in “diffuse” interstellar clouds, as opposed to very cold dense clouds with atoms packed more closely together (still very far apart by Earth standards, though). The “interstellar” part distinguishes them from absorption features coming from the atmospheres of stars. “Band” is used to indicate that the majority of the features appear broad in the spectrum of a background star — much broader than the narrow absorption lines coming from the star itself.

3This is because bright stars that are close to the Sun tend to have very few absorption lines coming from their own atmospheres, so it’s much easier to detect interstellar absorption lines.

This post by Gail Zasowski is part of the SDSS Celebration of the International Year of Light 2015, in which we aim to post an article a month in support of the celebration of light.