The SDSS-III Baryon Oscillation Spectroscopic Survey (BOSS) has completed its main survey of galaxies and quasars. With 1.35 million luminous red galaxies and 230,000 quasars across 10,200 square degrees of the sky, BOSS has exceeded the number of objects and sky area goals from the original SDSS-III proposal.

Reaching this milestone involved the hard work and efforts of many people. In particular, the mountain and observing staff at Apache Point Observatory have been worked hard and efficiently to observe 2,300 plates with the new BOSS spectrograph in 4.5 years of dark time. 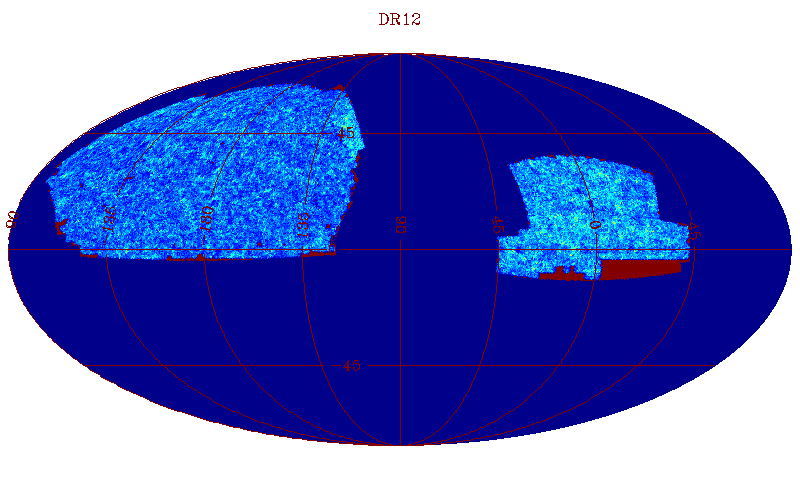 The coverage map of the completed BOSS main survey in equatorial coordinates with (RA, Dec)=(90,0) in the center of the image. Completed areas are shown in light blue and yellow. The red area is a 10,500 deg^2 region from which observations were selected. The project goal was to observe the 10,000 deg^2 footprint above declination -3 deg. A 200 deg^2 region was added between declinations of -3 deg to -7 deg to provide overlap with the Dark Energy Survey.

For the remaining 3 months of SDSS-III, the BOSS spectrograph continues to observe new interesting classes of objects as part of a set of ancillary proposals that were internally competed within the SDSS-III collaboration.

All of SDSS-I, SDSS-II, and SDSS-III/SEGUE observed 1.84 million survey-quality spectra with the original SDSS spectrograph during the timeframe 1999-2009. SDSS-III DR12 will be released publicly in 2014 December and the final BOSS data in DR12 is expected to exceed 2.7 million survey-quality spectra, including calibration targets, stars, repeated observations, and ancillary programs.

One thought on “BOSS Completes its Main Survey of Distant Galaxies and Quasars!”