(The following is a guest post by Lihwai Lin, an assistant research fellow at Academia Sinica, Institute of Astronomy and Astrophysics. She is curretnly chairing the MaNGA merger working group and organized the MaNGA merger mini-workshop described in the article below.)

Galaxies are not isolated. During the lifetime of galaxies, they may encounter another galaxy and merge together to become a larger one. Mergers can induce gas to flow toward the inner parts of galaxies through tidal forces, triggering starbursts or even “switching on” a galaxy’s central black hole (the result is called an “active galactic nucleus,” or AGN). As a result of rapid gas consumption during mergers, a galaxy may lose the majority of its gas and end up as a “dead” system with little on-going star formation. This kind of merger event is rare, but is suggested to be an important process that transforms star-forming galaxies into the quiescent population. One of the key sciences that MaNGA is attempting to address concerns the role of galaxy interactions and mergers in shaping the properties of galaxies. With just one year of the MaNGA survey, we have obtained Integral Field Unit (IFU) observations for ~150 paired galaxies, ranging from early encounters to post-mergers.

Examples of galaxy pairs selected from the SDSS. The magenta hexagons represent the IFU coverage of MaNGA. (Credit: SDSS)

In early November of 2015, experts studying galaxy mergers gathered together in Taipei for the “SDSS-IV/MaNGA mini-workshop on galaxy mergers”. This 3-day workshop consists of 6 invited talks, 5 contributed talks, plus 2 discussion sessions devoted to theoretical and observational efforts, chaired by Jennifer Lotz (STScI) and Sara Ellison (University of Victoria) respectively. 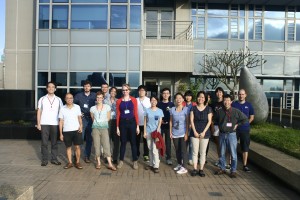 Participants for the MaNGA mini-workshop on galaxy mergers, held at Academia Sinica, Institute of Astronomy and Astrophysics (ASIAA), Taipei, on Nov. 4-6, 2015.

With MaNGA’s spatially resolved observations for merging galaxies, we can study not only where and when the star formation is triggered and shut down during the process of  galaxy interactions, but also how the massive black holes in the center of galaxies can be fueled and grow through galaxy mergers. The observational results from MaNGA will also be compared in great detail with theoretical predictions from state-of-art simulations. Stay tuned for more exciting science that will come from MaNGA!