Some months ago, members of the MaNGA (Mapping Nearby Galaxies at Apache point observatory) survey (part of SDSS-IV) were asked to suggest ideas for a suitable taglines/catchphrase which would describe the survey in one sentence. This idea was that this would go on promotional materials SDSS-IV would take to the American Astronomical Society Meeting, and also the main SDSS website.

The working favourite to that point had been “the galaxy survey for people who love galaxies”, but we wanted something which described the scientific goals of the survey more precisely.

In the word of MaNGA PI, Kevin Bundy this request resulted in an “outpouring of creative, collective genius” (a phrase which Kevin suggested might itself be the appropriate one to describe the MaNGA team).

Here are some of the ideas the team came up with, catagorised by Kevin:

Ideas which reference The 3rd Dimension

The final decision was made to go with “Mapping the inner workings of thousands of nearby galaxies” for our website, and we have a banner which says “The 3D Lives of Galaxies”, although we also really like the creative idea of making an API to return all of these randomly. 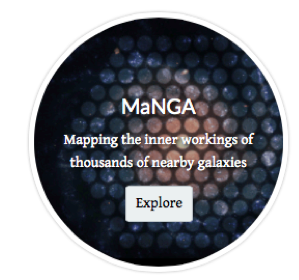