Black holes are intriguing objects. A black hole is a phenomenon whose gravity is so strong that not even light, the fastest traveller in the Universe, can escape from its influence. Once thought mere oddities due to their extreme properties, today, black holes are found to be vital in the formation and lives of galaxies, including our own Milky Way.

But how do we know black holes exist if we can’t see them? Well, even if we can’t see a black hole directly we can observe their influence and indeed the energy and light emitted as gas, dust and stars fall into a black hole; that is, we can see black holes when they are actively “eating” material.  When the supermassive black hole, which can be up to a billion times more massive than our Sun, at the center of a galaxy starts to eat new material the resulting process is so bright it can be seen out to ~200 billion lightyears away.  Astronomers call the observational result of this process either an active galactic nuclei, or in the most extreme examples a “quasar”. So you might be surprised to find that an object that emits no light can cause the brightest known phenomenon in the Universe! 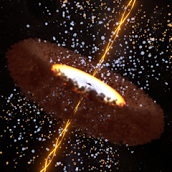 An artist’s rendition of a quasar created by Coleman Krawczyk (ICG Portsmouth).  The image is drawn on a radial log scale with the central black hole 1 AU in size.

The light of quasars is not produced by the black hole itself, but instead it comes from the material, mostly gas, that is falling into the black hole.  Different types of light are produced by this material at different distances outward from the black hole.  Near the surface (or horizon) of the black hole (about the distance of the Earth’s orbit away for supermassive black holes in galaxies) this gas becomes extremely hot and produces X-rays. Stretching out from this to fill a region about the size of our Solar System, a disk of gas shaped like a frisbee is formed.  The inside of this disk is closer to the black hole than the outside, so it rotates faster causing friction within the disk.  This friction causes the gas to heat up and glow, producing light in the optical to ultraviolet part of the spectrum.

From the edge of the gas disk to a distance of about 3 light years (similar to the distance from the Sun to the next closest star), the temperature becomes low enough that particles of “interstellar dust”, made of carbon and silicon, form.  These dust clouds form what is know as the “dusty torus,” a donut shaped ring round the gas disk. Some of the light coming from the gas disk is absorbed by the dust and re-emitted at longer wavelength infrared light. At very large distances from the black hole, some quasars have radio jets coming out along the poles.  As the name suggests, this jets produce light at radio wavelengths cased by electrons being accelerated along a strong magnetic field.  When these jets are present they can be up to ~300 thousand lightyears (~3 times the diameter of our entire galaxy!) in size.

Not only can a black hole produce light, it can create light at all wavelengths from the radio up to the X-ray, and across an area stretching from the size of the Earth’s orbit out to distances larger than the Milky Way.  Therefore, growing black holes, and the regions around them are anything but “black.”

With discoveries from its earliest imaging campaigns, the SDSS extended the study of quasars back to the first billion years after the Big Bang, showing the rapid early growth of black holes and mapping the end stages of the epoch of reionization. 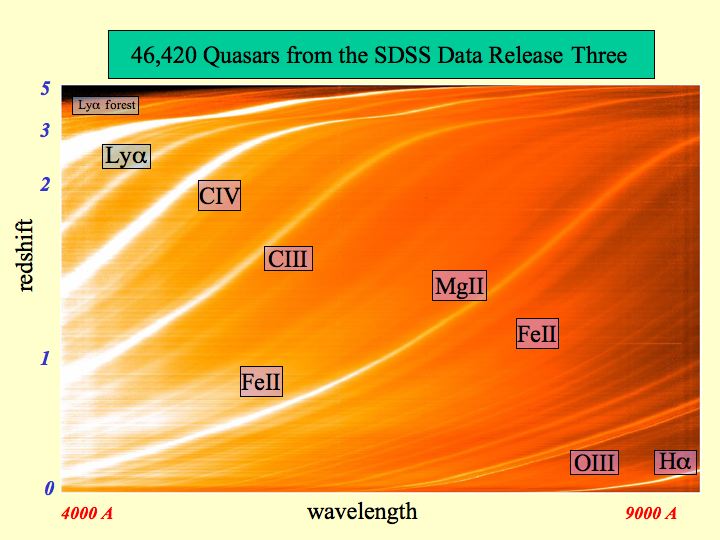 Stacked spectra of more than 46,000 quasars from the SDSS; each spectrum has been converted to a single horizontal line, and they are stacked one above the other with the closest quasars at the bottom and the most distant quasars at the top.
Credit: X. Fan and the Sloan Digital Sky Survey.

With full quasar samples hundreds of times larger than those that existed before, the SDSS has given us the most accurate descriptions of the growth of black holes over cosmic history.  SDSS spectra show that the properties of quasars have changed remarkably little from the early universe to the present day.

Growth in the number of known quasars in the largest homogeneous (solid) and heterogeneous (dashed) quasar catalogs as a function of time. The Sloan Digital Sky Survey catalogues started being produced in 2000. Fig. 1 from Richards et al. (2009).

SDSS studies have probed the dark matter environments of quasars through clustering measurements, revealed populations of quasars whose central engines are hidden by obscuring dust, captured changes in quasar spectra that show clouds moving in the gravitational grip of the central black hole, and allowed a comprehensive census of the much fainter accreting black holes (active galactic nuclei, or AGN) in present-day galaxies.
This, our first post for the IYL2015 is a collaboration between Coleman Krawcyzk (ICG Portsmouth); Nic Ross (ROE) with help from Karen Masters (ICG Portsmouth).
This post is part of the SDSS Celebration of the International Year of Light 2015, in which we aim to post an article a month about how SDSS uses light in our mission to study the Universe.