For more than a decade, SDSS astronomers have been mapping all the galaxies of the Universe – but what about the space between the galaxies? How can we map whatever cold, dark gas might be there?

When we look at spectra of distant quasars, we learn not only about the quasars, but also about whatever the light passed through on its journey from quasar to telescope. In this case, absorption lines in the quasar spectra reveal gas in intergalactic space. The SDSS has obtained spectra for more than 200,000 quasars, providing a map of gas absorption across the sky.

Mapping the distribution of matter between galaxies is one of the greatest challenges in modern astronomy. When we look up in the sky, even with the largest telescopes, we see mostly dark space between galaxies that appears to be totally empty. Theories of cosmology predict that most of the matter in the Universe should be in the form of diffuse gas between galaxies, but actually detecting that gas is extremely challenging because it emits essentially no light.

A team of SDSS-III scientists led by me and my Johns Hopkins colleague Brice Ménard has just finished a study that takes on this difficult task. Using new advanced statistical techniques, we have been able to detect the very weak but clear signature of magnesium in intergalactic space. Those techniques allowed us to find how the amount of gas around galaxies changes with increasing distance from the center of the galaxies. Our findings are summarized in a paper submitted to the journal Monthly Notices of the Royal Astronomical Society, and available on the arXiv preprint server:

To detect gas in the intergalactic space, we used its absorption effects. When light from a distant source passes through a gas cloud, photons at a specific energy are absorbed, leaving a valley in the source’s spectrum.

The light sources we used are quasars – very bright objects powered by supermassive black holes at the centers of distant galaxies. Quasars are the brightest things in the Universe, so they do an excellent job of shining through the intergalactic gas we want to study. And the SDSS has obtained spectra of more than 200,000 quasars, letting us see the signal of intergalactic gas all over the sky.

Most of the gas absorption, however, is so weak that its signature is hidden by variations in the quasar spectra themselves. So even with the huge dataset we have, we had to use new statistical techniques to find the gas. Using a sample of one million galaxies that lie between us and thousands of distant quasars, we looked at the place in the quasar spectrum corresponding to magnesium. Our statistics showed us that, on average, the quasars appeared to be missing 0.01% of the magnesium. In other words, out of every 10,000 photons emitted by a quasar at the right wavelength, 9,999 made it to Earth, and one didn’t show up because it was absorbed by magnesium between galaxies. This effect is way too small to see for any individual quasar – we can only find it by averaging the light from all the quasars, all over the Universe. 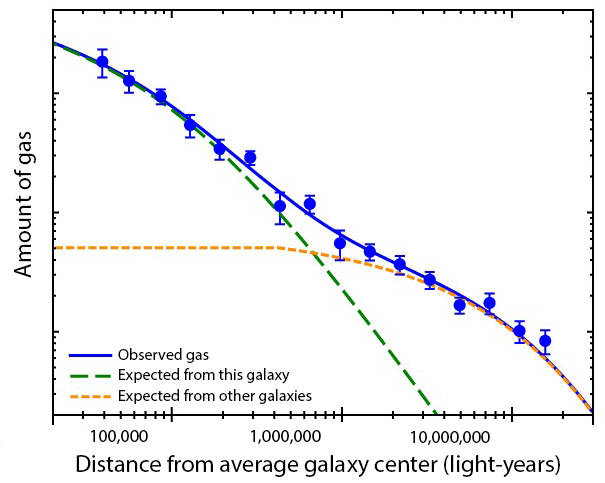 This graph shows how the amount of gas around an average galaxy changes with increasing distance. The blue points show our latest results. The green and orange lines show the predicted amount of gas associated with that galaxy (green) and the galaxies around it (orange). The blue curve is the sum of the orange and green curves. The graph shows that the observed amount of gas matches predictions very well.

New surveys such as SDSS-IV, the next phase of the SDSS, are now being prepared and will soon provide us with even more data to help us map the distribution of matter in space with even higher sensitivity. Astronomers will be able to map different elements around different types of galaxies, across cosmic time. These observations will lift the veil of the universe and reveal the overall distribution of matter. In addition, they will provide new clues to a better understanding of the formation and evolution of galaxies like our own Milky Way.

The future is bright for studies of dark regions in space.