All of the Sloan Digital Sky Surveys currently active (APOGEE, eBOSS, MaNGA, Spider and TDSS) are spectroscopic surveys. A spectroscope is a scientific instrument, which splits light into a rainbow (or spectrum) in order to make precise measurements of the amount of light of different colours (or wavelengths). To date the SDSS collaborations have used three different spectroscopes (the SDSS, BOSS and APOGEE instruments) to measure the rainbow of light from millions of stars and galaxies in our mission to map the Universe. Below is an image of one of these spectrographs. 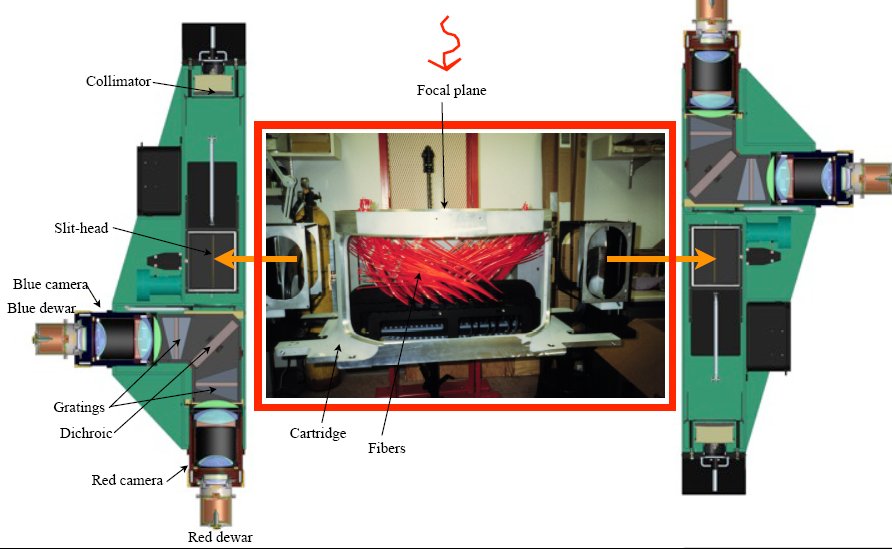 The BOSS Spectrograph. In centre the instrument is shown with optical fibres plugged into it. The diagrams at the side show the path of the light through the instrument after it passes down the fibre. Different parts are labelled.This instrument you have made has many similarities to the BOSS spectroscope shown above.

It is possible to make your own spectroscope using simple household materials and use it to measure the spectra of common light sources.  Here are instructions to build an SDSS CD Spectropscope. This instrument you can make has many similarities to the BOSS spectroscope shown above. For example:

Your spectroscope will be sensitive to all visible light. In the BOSS spectroscope a “dichroic” is used to split the light into red and blue before passing it through the gratings. A dichroic has a special property that it is reflective to blue light, while red light passes through it. This means the light can be spread out more, and special cameras can be used to detect light from near ultraviolet, right across the visible rainbow to the near infrared.

Instead of a camera you will use your eye (or you could try using a camera lined up with the viewing window). In the BOSS spectroscope there are four cameras (two for blue and two for red light) each kept specially cold in a “dewer”.

When the light passes through the slit it gets spread out a little bit, and then when it passes through the CD, the very fine slits in it (the diffraction grating) spread it out more. Different colours are spread out (or “dispersed”) by different amounts. The angle of dispersion is set by both the wavelength (colour) of the light, and the line spacing on the diffraction grating. The below image illustrates this (compared to refraction which can also create spectra; this is the physics which creates natural rainbows from refraction in raindrops). The diffraction angle increases with wavelength (and decreases with the line spacing). 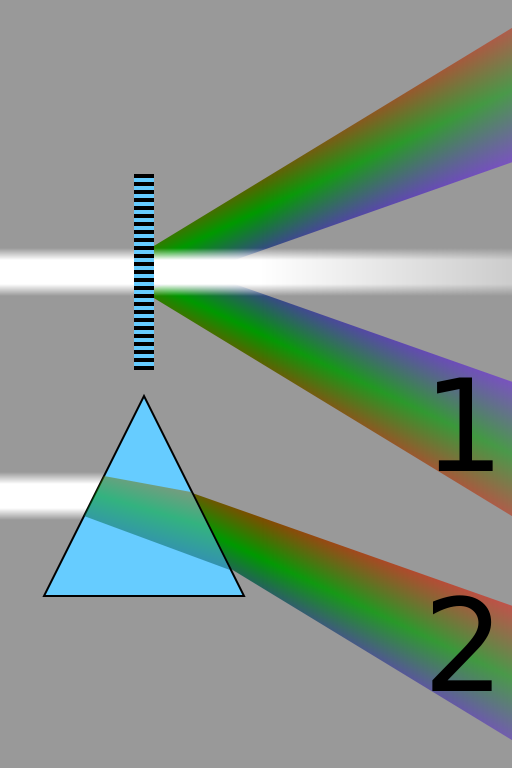 Here are some examples of the kind of spectra you should be able to take with your CD spectroscope.

To make precise measurements we don’t tend to look at a pretty image of a rainbow, but instead make a graph which shows the brightness as a function of the wavelength (colour). An example of this is shown below which is a typical spectrum of a galaxy shown at five different distances (or redshifts).

If you do make an SDSS CD Spectroscope please take a picture (either of it or through it) and share it with us on Twitter or Facebook.