The spotlight this month is on Jo Bovy, a John Bahcall Fellow and Long-term Member at the Institute for Advanced Study in Princeton. He completed his PhD at New York University. Within APOGEE, he is the Science Working Group Chair for APOGEE-1, and therefore coordinates the scientific analysis of the APOGEE dataset. 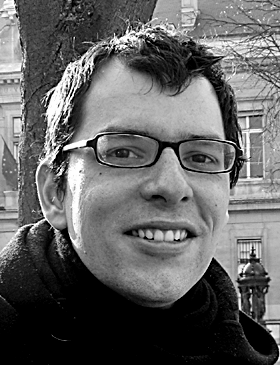 Jo uses big datasets from numerous surveys to understand how the Milky Way came to be. To do this, he studies how stars move and what are their chemical compositions. When he first tackled APOGEE’s huge database of stellar spectra in 2011, he realized that APOGEE’s spatial coverage of the Milky Way’s disk allowed the circular velocity of stars in the Milky Way to be measured with greater accuracy than had ever been done before. (The circular velocity is the speed at which a star orbits the center of the Galaxy. This number changes as a function of distance from the center, and precise measurements are required to correctly determine, for instance, the Galaxy’s mass, but also to measure peculiarities in stellar velocity, which help us determine where it might have originated.) The data analysis in his paper is complex, but he was able to draw two important and straight forward conclusions from this work:

The first result was expected: although the circular velocity in the Sun’s neighborhood was assumed to be about 220 km/s for the last 30 years or so, Jo’s was the first precise measurement to confirm this value. The second result, however, was a surprise: previous measurements had pegged the Sun’s motion relative to nearby stars at something like 12 km/s, not 25 km/s. This result was confirmed using a sub-set of APOGEE data (a mere 19,937 stars, or about 15% of the full APOGEE dataset) known as the APOGEE Red Clump Catalog.

Why does this seemingly small difference matter? From an outsider’s perspective, going from 12 km/s to 25 km/s is still only changing from about 5% to 10% of the circular speed, so either result might seem acceptable! But is is important, and Jo explains why: We orbit the Sun, and the Sun orbits the center of the Galaxy just like every other star. Therefore, every speed that we measure for another star is relative to our own motion. If we can understand how we move in the Galaxy, then we will have a much better understanding of the dynamics of the entire Milky Way.

And understanding the Milky Way is, after all, the whole point!

One thought on “Spotlight on APOGEE: Jo Bovy and the Motion of the Sun”