Thirty members of the BOSS Lyman-alpha Forest and Quasar Working Groups met for a workshop in Pittsburgh from Jun 21-24 , hosted by the McWilliams Center for Cosmology at Carnegie Mellon University.

The Working Groups comprise those survey members most interested in high redshift quasars and the intergalactic medium. The quasar spectra collected by the survey act as backlights, illuminating the intergalactic gas. This gas causes absorption features in the spectra (mostly the hydrogen Lyman-alpha “forest”) and by analyzing the spectra we can measure the large scale structure of intergalactic material. The prime aim of the survey is to see this structure on scales many times larger than any previous Lyman-alpha forest survey, and use the presence of the baryon oscillation feature to constrain dark energy.

The accumulation of this vast new dataset, will make many other science projects be possible, from measurements of faint quasar black hole clustering to the searches for faint traces of rare chemical elements in intergalactic space. The Pittsburgh meeting was partly dedicated to exploring these different possibilities.

BOSS Survey Scientist Kyle Dawson started the meeting off with a summary of what has been a successful first year of survey operations. There are nearly as many quasar spectra in the interesting redshift range to analyze than all previous surveys put together, and there are still 5 years of data to come. 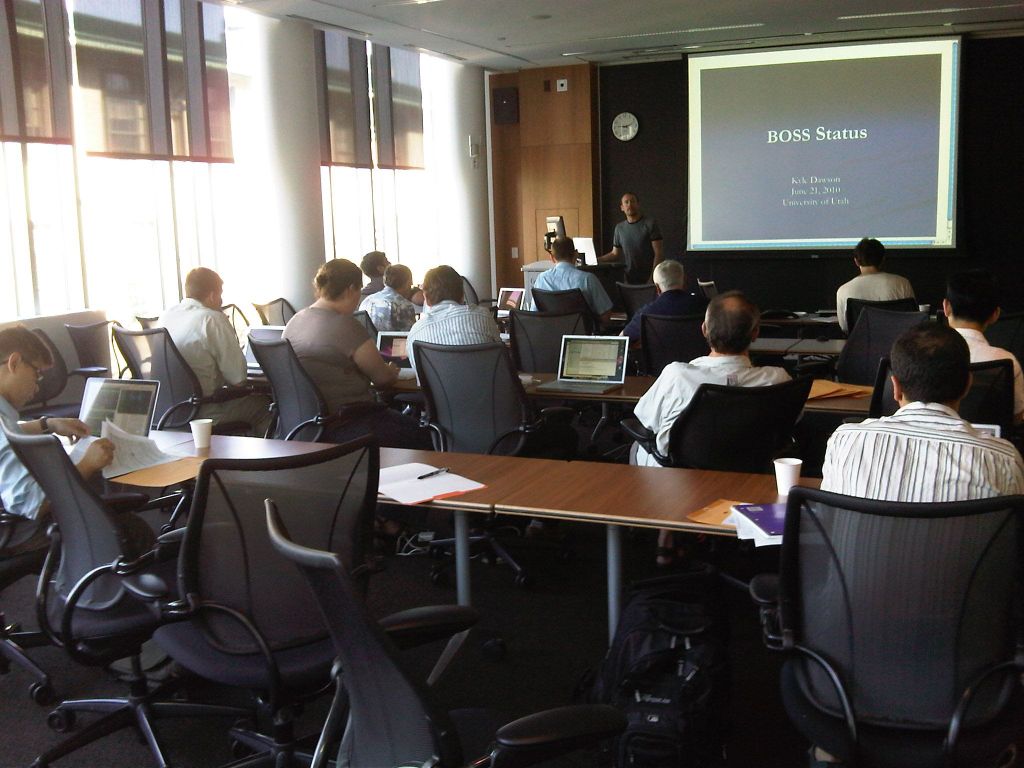 Questions of survey strategy came up, and in particular how the signal to noise reached so far in spectra will translate into cosmological constraints. Here David Weinberg leads a discussion on how well the survey is doing.

Preliminary results from first year data were presented in many of the talks. Here Jordi Miralda-Escude reports on measurements of large-scale structure in the intergalactic medium made by the survey. 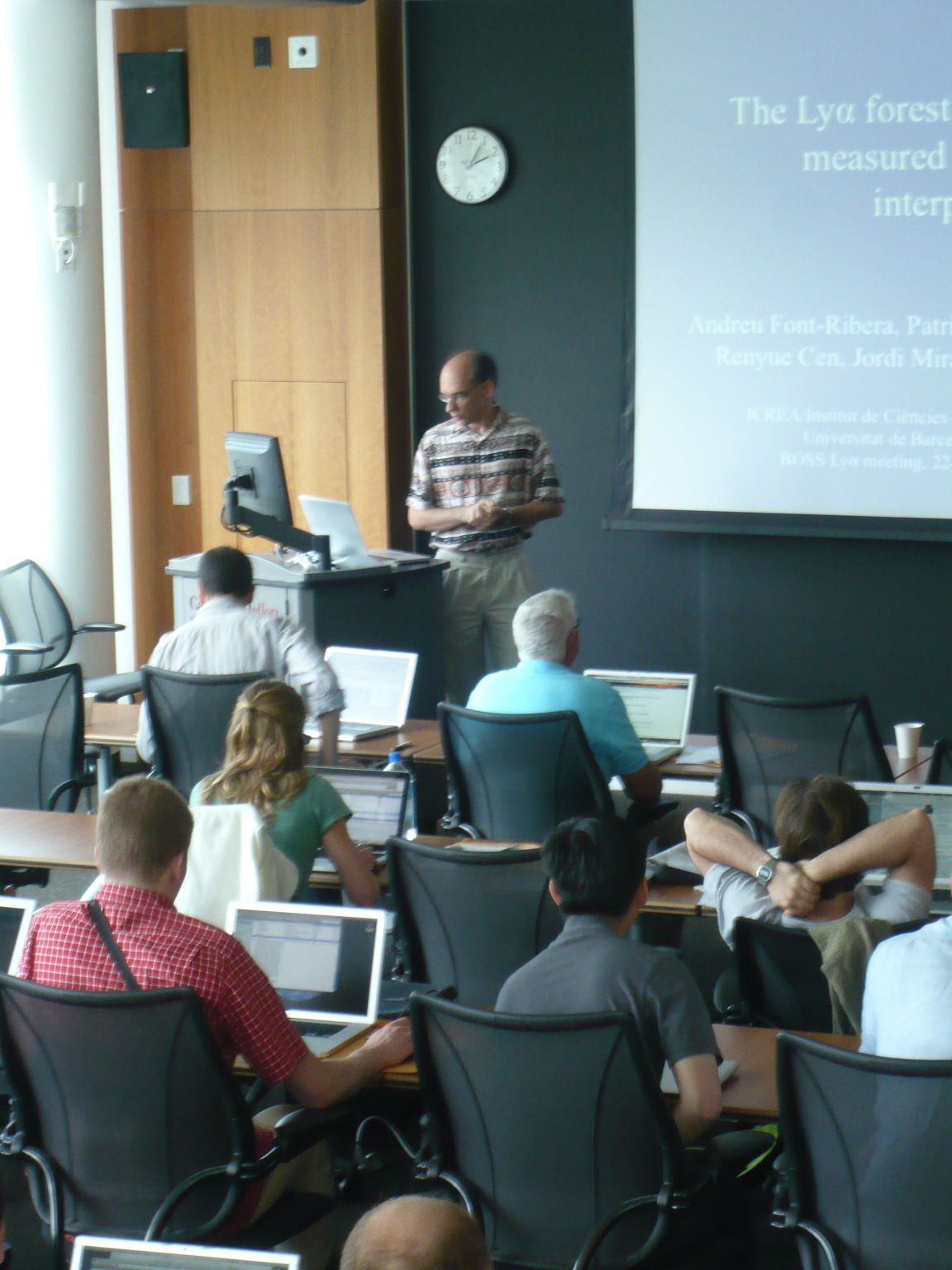 Members of the French Participation Group were heavily represented. Their team is examining every single of the tens of thousands of quasar target spectra by eye. Christophe Yeche and Isabelle Paris seen here with conference co-organizer Nic Ross show that they must be enjoying it. 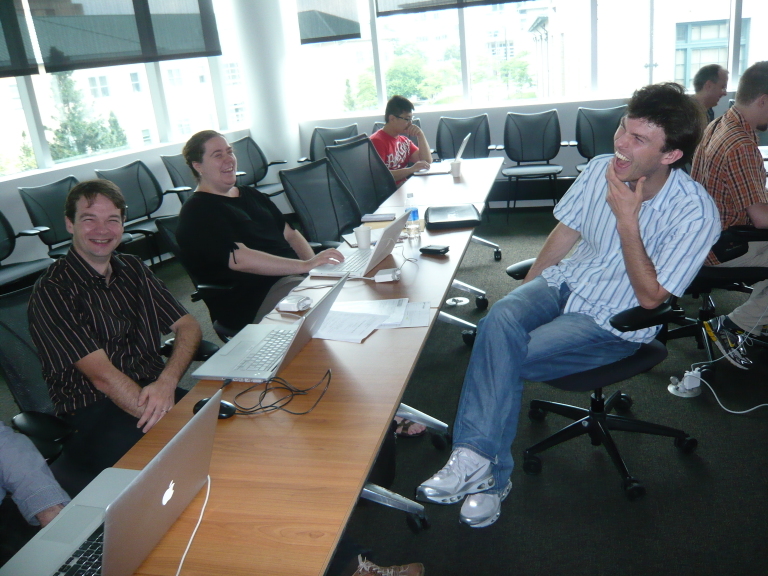 Whether the SDSS3 logo looks better on an ipad was also an interesting issue for some people. 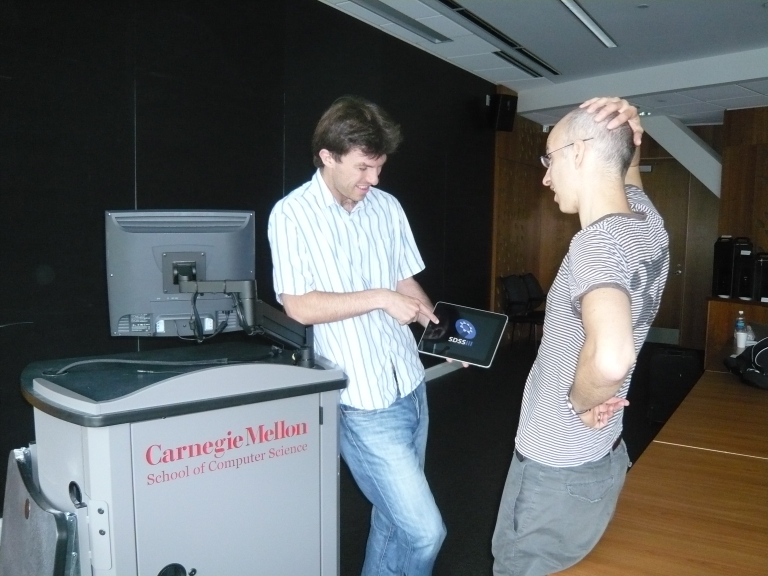 With 30 talks and working group sessions spread over 4 days, it was useful to be able continue serious discussion at a Pittsburgh landmark, the Church Brew Works: 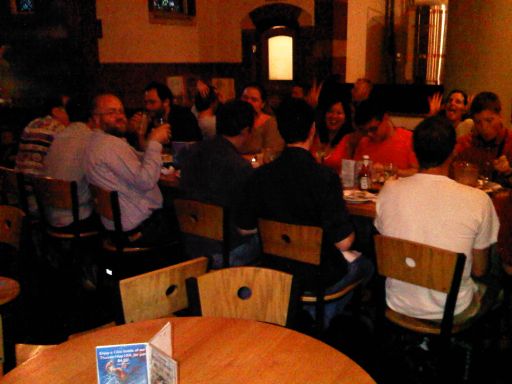