APOGEE surveyed 156,481 stars in its first three years. And of course APOGEE-2 is going to increase this sample size significantly. But to celebrate the successful end of APOGEE and the Data Releases 11 & 12 (also see here), we’d like to share with you a slice of the kind of data it collected.

Some background: The APOGEE/APOGEE-2 instrument collects near-infrared spectra of distant stars, and the survey is aimed at studying the history of the Milky Way Galaxy. How it does that is explained here. Along the way, it has taken spectra of each known spectral type: from hot O-type stars (with surface temperatures of about 30,000 degrees, or five times the surface of our own Sun) down to M-type stars (about 3,500 degrees, or roughly half the temperature of the Sun). Each of the spectral types (O, B, A, F, G, K, M) is defined based on how many and what kind of atomic or molecular species are seen in their spectrum. For instance, O-type stars have lots of singly-ionized atomic species visible in their spectra, whereas A-type stars have very strong hydrogen lines, and M-type stars have lots of neutral molecules, especially lines of TiO when you look in the visible portion of the spectrum.

These spectral types were defined using the visible portion of the spectrum. So when we look in the near-infrared, do they appear to be different? Here we go: 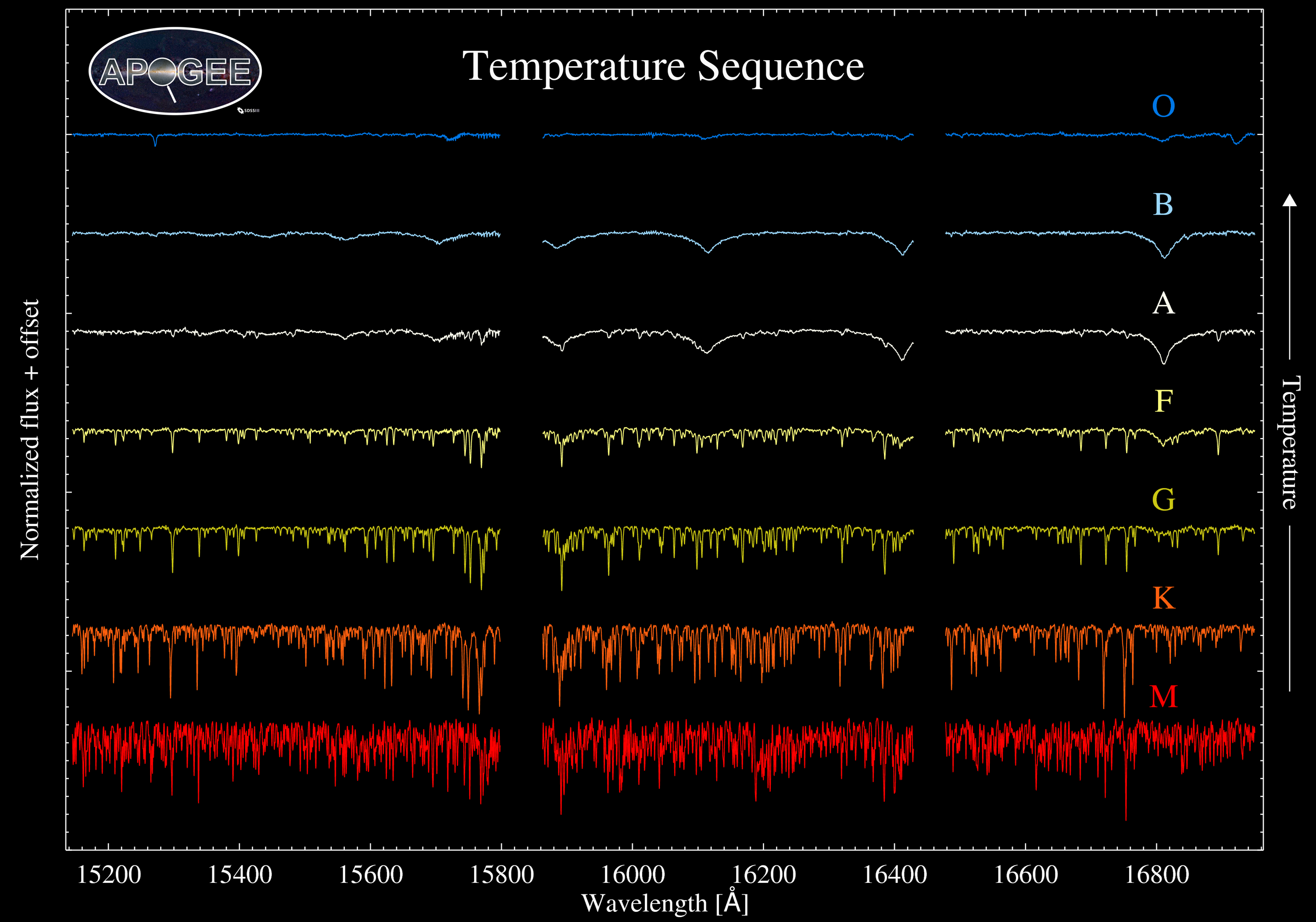 The O-type star spectrum looks pretty bland — the strongest lines due to ionized Helium in the near-infrared H-band are at 15721 and 16922 Angstroms (the line at 15271 Angstroms is due to interstellar molecules, and is therefore not from the star). The B-type star shows pretty significant absorption lines due to the Brackett series of atomic Hydrogen (those transitions beginning at the n=4 excited state), and those plus a whole bunch of smaller wiggles from other atoms can clearly be seen in the A- and G-type spectra as well. Below that and things look a lot more complicated. If you have experience with data like these, you might be tempted to think that the spectra of the G-, K-, and M-type stars are “noisy”, meaning that they weren’t observed for long enough and therefore weren’t detected well. But that’s not the case: every single spike visible in these spectra is due to an atomic or molecular transition that originates in the photosphere of the star!

All told, these spectra allow us to study sixteen different atomic elements besides hydrogen. Which ones, you ask? Oh all right, I’ll tell you: C, N, O, Na, Mg, Al, Si, S, K, Ca, Ti, V, Cr, Mn, Fe, Co, and Ni. As you can see, this is a truly beautiful, complex dataset. We’ll keep up-to-date science results at this page.