Many people contribute to the success of SDSS, not least the staff working at Apache Point Observatory, where our 2.5m Sloan Telescope is located. 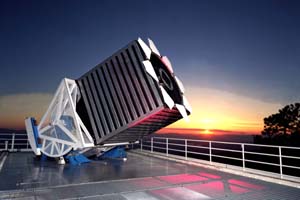 The below job add for a Senior Software Developer to support engineering and observing at Apache Point Observatory is copied from a posting on the New Mexico State University website: http://jobs.nmsu.edu/postings/28105

New Mexico State University is seeking a technical and computer-oriented person for a Senior Software Developer position to support daytime engineering and night-time astronomical observing at Apache Point Observatory (APO), in Sunspot, NM. The observatory at Sunspot NM will be location of work place. Work schedule on site is generally M-F 8-4:30.

Must be able to work at 9500 ft MSL, provide critical support off hours, holidays and weekends.

Paper/email documents will not be accepted. Required documents (CV/Resume, 3 references, unofficial copy of transcripts) must be attached to the NMSU electronic application system at http://jobs.nmsu.edu.

Employment is contingent on funding and eligibility for employment in U.S. and results of a background verification. Target start date is July 1, 2017.

Direct link to the posting on the NMSU website: http://jobs.nmsu.edu/postings/28105 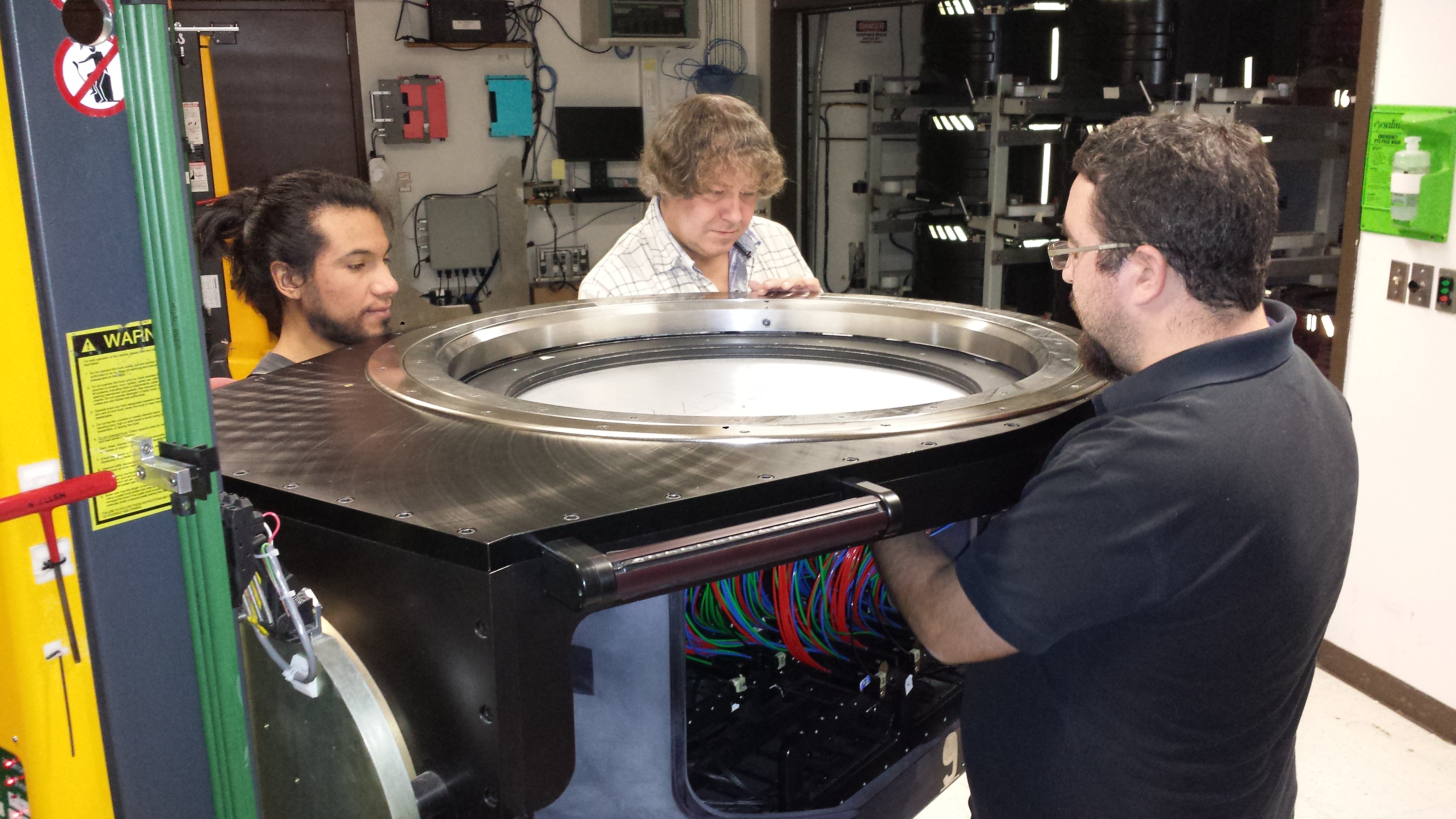 While at APO, Jamie, Christian, and Andres are learning a number of important skills that they will take back to Las Campanas Observatory. This includes plugging and unplugging plates: 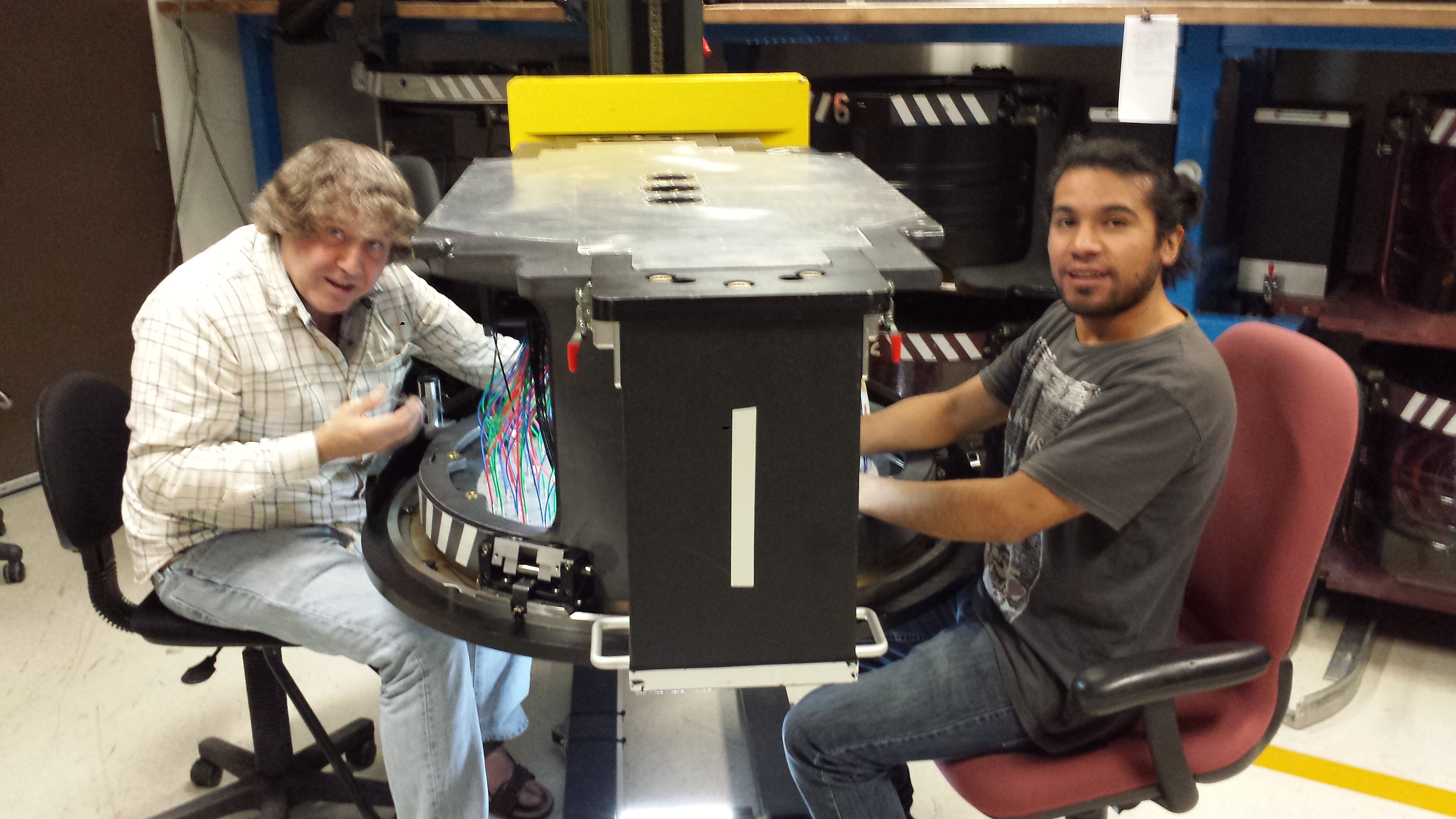 They are also learning to use the new Mock Up and Training Facility tripod, cartridge, and dolly (seen below). This setup will be sent down to Universidad de La Serena so that this crew can train future support staff. 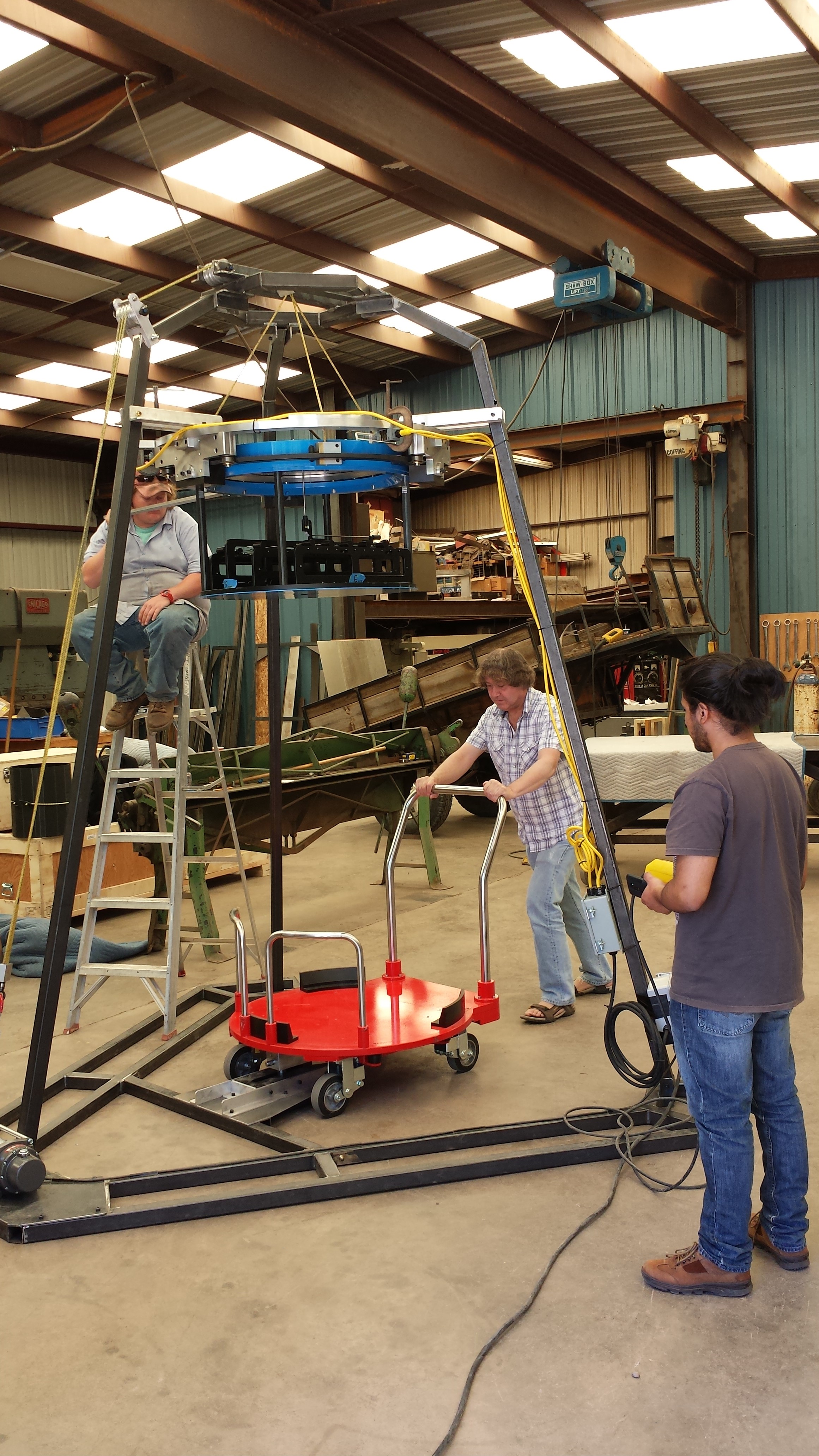 “Torquing” the plug plate slightly is a necessary skill so that it aligns with the field of curvature of the telescope. Using a ring around the plate (shown being attached below), the plate can be bent ever so slightly: 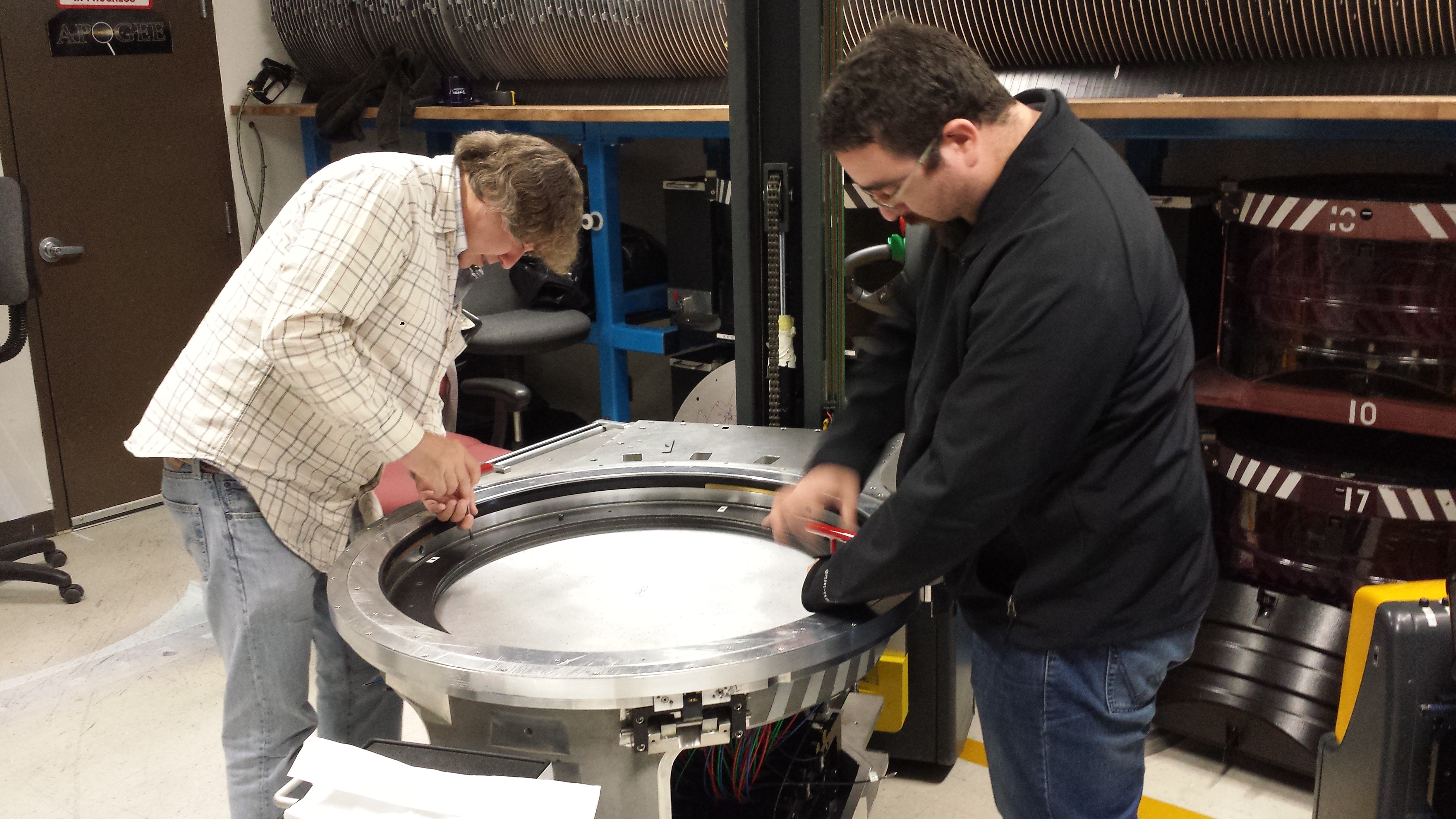 And, of course, it is important to check your work. In this case, a computer is used to map the locations of fibers on the plate, ensuring that they will be on target when the plug plate is used on the telescope: 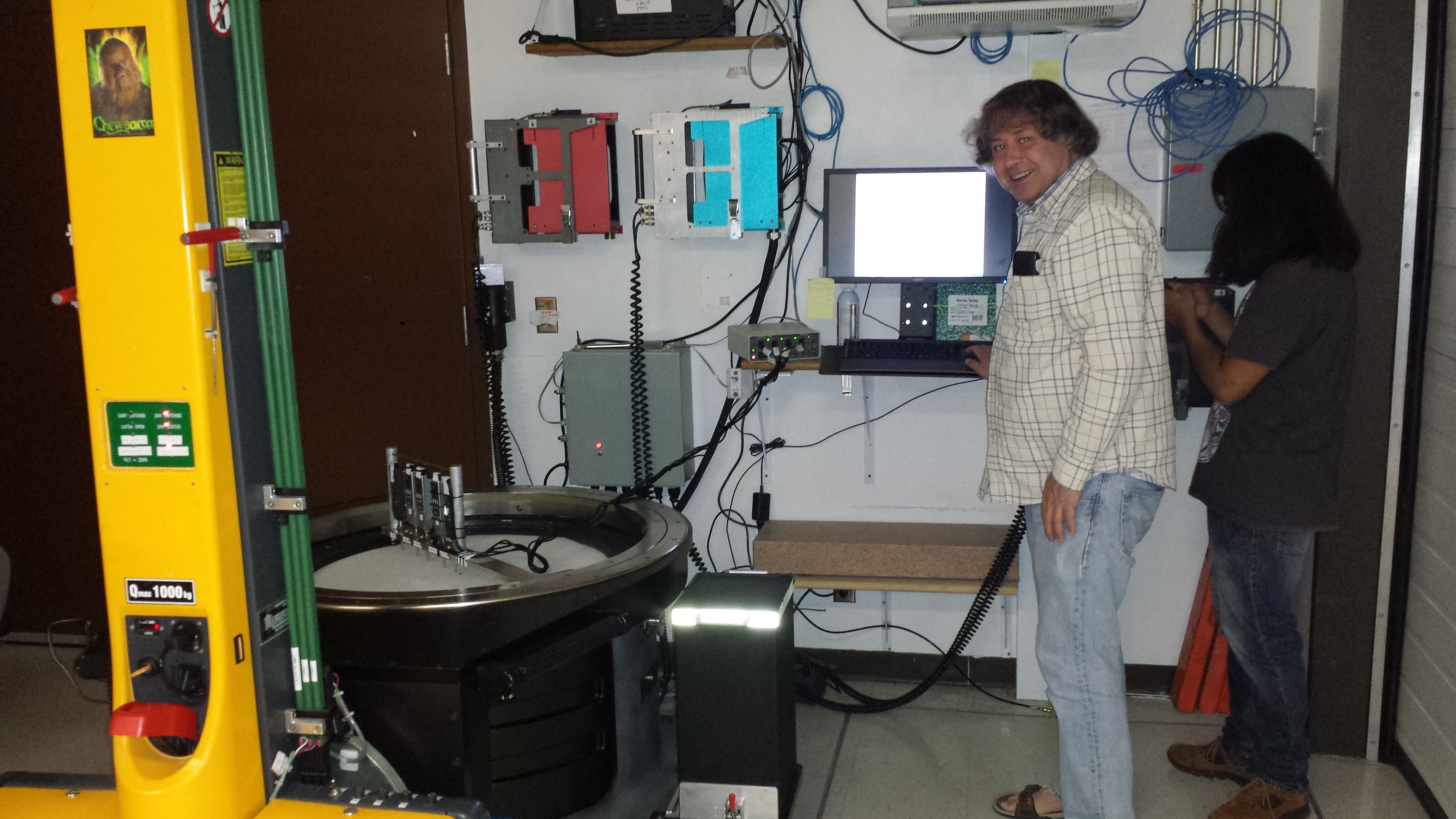 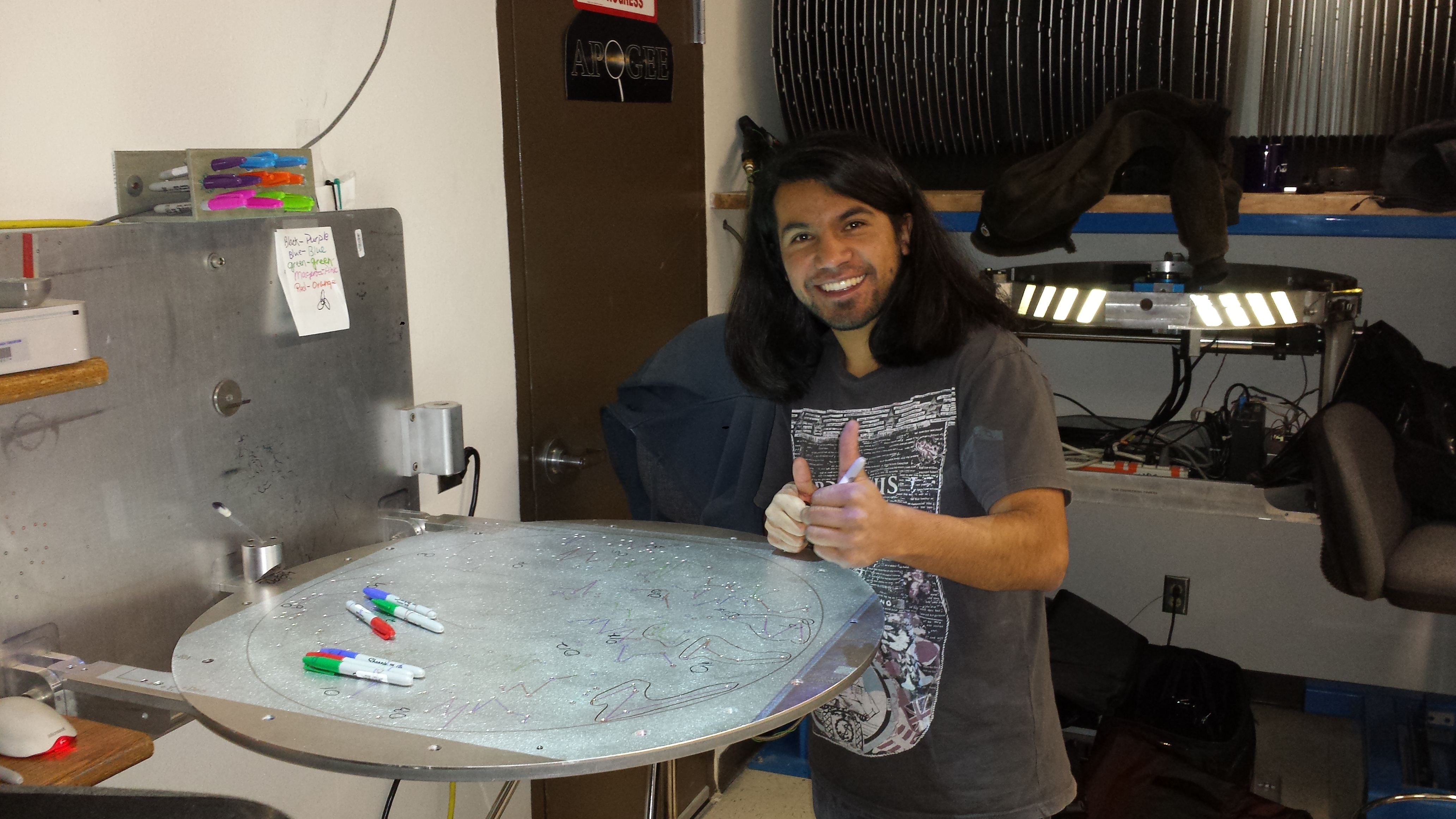 Special thanks to Veronica Motta, Professor of Astronomy at Universidad de Valparaíso, for translating the English into Spanish.

Back in mid August I set up a Google alert search on “sloan digital sky surveys”. Here is a summary of 3 months of mentions of SDSS in online news:

August 21st: Discovery of one of the oldest stars in the Universe, SDSS J0018-0939, illustrated with SDSS image of the star:
Space Fellowship.com, IBTimes, KRWG.org 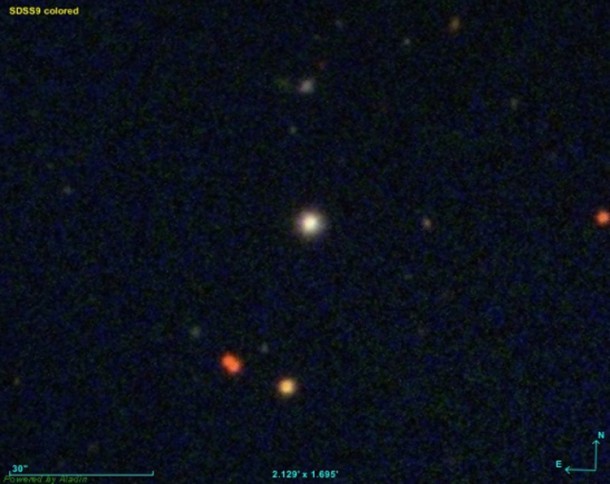 An optical image of the star SDSS J0018-0939, obtained by the Sloan Digital Sky Survey. This is a low-mass star with a mass about half that of the Sun; the distance to this star is about 1000 light years; its location in the sky is close to the constellation Cetus. (Credit: SDSS/NAOJ)

Sept 10th, 21st: A report on looking for patterns in the properties of quasars using SDSS spectra:
Arstechnica.com, ScienceCodex.com.

So obviously this mentions SDSS, but implies it’s a robotic telescope!  Our team of observers, plate pluggers, and drillers, and the hundreds of other people who work hard to keep SDSS observing might object to this…. 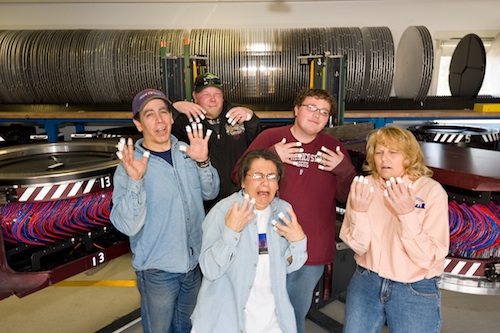 In March 2012, BOSS observed 103,000 spectra, each of which was routed through a fiber-optic cable that was plugged by hand. The industrious APO plugging crew is pictured here showing the deleterious effects of having placed more than 2,000 fibers/finger in a month. But don’t worry, they recovered have continued to plug every fibre optic by hand during the day at APO – they might even be doing it as you read this! (Image Credit: Dan Long, APO).

Amazing that our observing process is so smooth that to outsiders it appears to be like a robot! Stay tuned for a newly planned “The SDSS Telescope is not Robotic” article. 🙂

Cites SDSS as one of the reasons it was right that the invention of the CCD got the 2009 Nobel Prize in Physics because of the realms of discovery it opened up:

“The world could get along well without camera cell phones. What’s exciting about CCDs, whose inventors won the 2009 physics prize, is their use in the Hubble Space Telescope and the Sloan Digital Sky Survey.”

Authors use a sample of 50 non-barred and two armed spiral galaxies selected from SDSS and measure spiral arm pitch angles, finding most are only approximately log spiral, typically having decreasing pitch angle as radius increased. Link to paper. 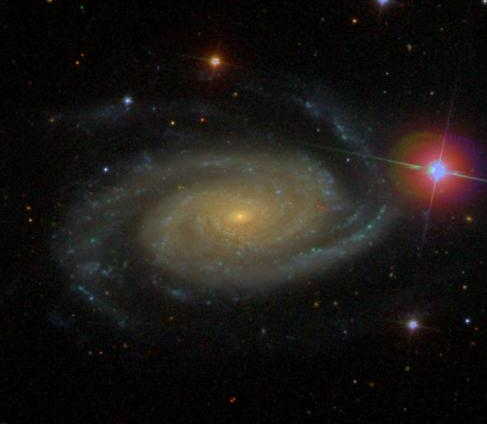 Report on release of images from the Chandra archive, which us SDSS images (among many others) to make nice multi wavelength images, like the below one of NGC 4736. 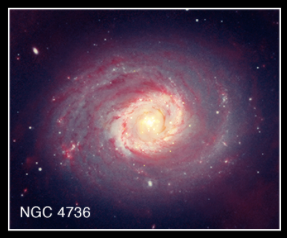 NGC 4736 (also known as Messier 94) is a spiral galaxy that is unusual because it has two ring structures. This galaxy is classified as containing a “low ionization nuclear emission region,” or LINER, in its center, which produces radiation from specific elements such as oxygen and nitrogen. Chandra observations (gold) of NGC 4736, seen in this composite image with infrared data from Spitzer (red) and optical data from Hubble and the Sloan Digital Sky Survey (blue), suggest that the X-ray emission comes from a recent burst of star formation. Part of the evidence comes from the large number of point sources near the center of the galaxy, showing that strong star formation has occurred. In other galaxies, evidence points to supermassive black holes being responsible for LINER properties. Chandra’s result on NGC 4736 shows LINERs may represent more than one physical phenomenon. (X-ray: NASA/CXC/Universita di Bologna/S.Pellegrini et al, IR: NASA/JPL-Caltech; Optical: SDSS & NASA/STScI)

Oct 27th: “Nothing Can Escape Black Holes – this Lucky Star Did”, TechTimes
Study which revealed a star loosing a portion of its mass to a black hole used some SDSS data.

Cosmologists use galaxies observed by the Sloan Digital Sky Survey to study the nature of dark energy and find support for a scenario in which dark matter decays into dark energy.

“I believe the large surveys shocked astronomers with how much data there is,” Hilbe says. “The Sloan Digital Sky Survey [one of the first automated and digitized comprehensive astronomical sky surveys] told them they needed statistics.”

Notice another mention of SDSS applying the process is automated, which we addressed above (thanks again to our wonderful observing team). Apparently this idea is fairly ubiquitous in the media…. 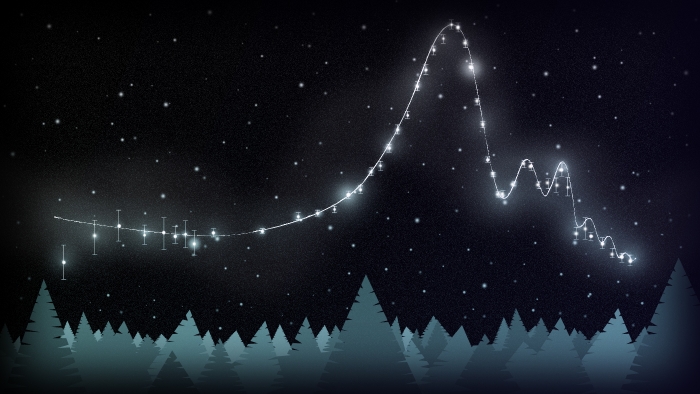 Nov 6th:  “Never has so much data been collected so fast” Edmonton Journal.
Article about big data in astronomy begins:

“When the Sloan Digital Sky Survey began in 2000, its telescope in New Mexico collected more data in its first few weeks than had been amassed in the entire history of astronomy.”

Articles use an SDSS image to illustrate the LMT pointing at galaxy 5MUSES-229, one of the dusty galaxies in the study which was used to study the relative contributions of AGN and star formation in the heating of dust. 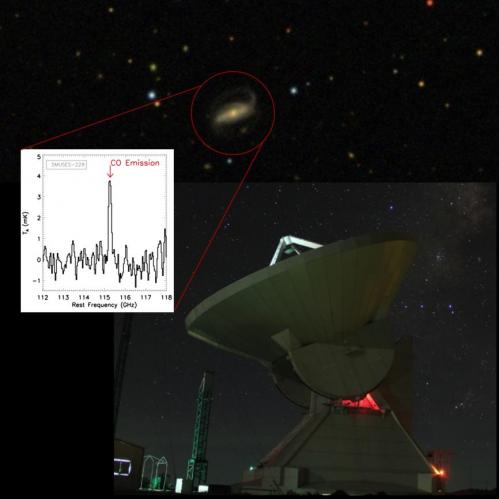 The LMT pointed at 5MUSES-229, a galaxy approximately one billion light years distant from the Milky Way. With the LMT, astronomers are able to observe the carbon monoxide emission from this galaxy. Credit: James Lowenthal, the background image showing the galaxy is from SDSS.

Report on study using a sample of poststarburst galaxies identified in SDSS and followed up with HST and Chandra.

To set up your own alert, visit news.google.com, search on “sloan digital sky survey” and click “Create alert” which can be found at the bottom on the page.

An SDSS plate was reused to wonderful effect this week, as a pinhole camera to project 640 simultaneous images of the recent partial solar eclipse on 23rd October 2014.

Sarah Ballard (@hubbahubble) and Woody Sullivan, from SDSS member institution, the University of Washington in Seattle came up with this unique idea to observe the solar eclipse.

Putting an SDSS plate to use as an eclipse viewer. Credit: Sarah Ballard and Woody Sullivan (Univ. of Washington). 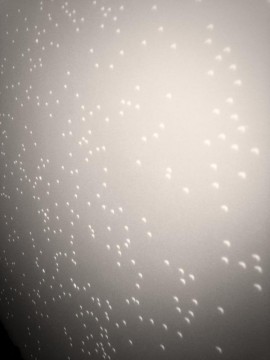 For more lovely or unusual eclipse photos, see this Solar Eclipse Roundup, by Sky and Telescope, who selected Sarah and Woody’s method as their “best use of old technology” for viewing the eclipse.

Below is a video showing the production of SDSS plug plates in the Physics Instrument Shop at The University of Washington. Plates are drilled, cleaned, and measured here before being shipped to APO. Once installed on the SDSS 2.5m telescope at APO, optical fibers carry light from each hole to the spectrograph being used. Every plate represents a patch of sky three degrees in diameter. The SDSS spectrograph allowed for 640 targets in this region, with the BOSS spectrograph that increased to 1000.

Videography and Editing by Gaelen Sayres and Mary Kawamura.

With thanks to Connor Sayres for sending us the video.