“Everything in this project makes life challenging.”

“Sure, but challenges make life interesting!”

This conversation occurred at a very special SDSS meeting in the middle of last month, and indeed no one could accuse SDSSers of ever taking it easy.  More than two years before the end of SDSS-IV, plans are well underway for its successor, SDSS-V.  Last month’s meeting was the first in-person gathering of the current major players since the Sloan Foundation awarded a $16M grant to the survey.  However, members of the team have been working hard for three years already: identifying the most exciting science goals, simulating survey strategies, and designing new hardware, among other tasks.  Dr. Juna Kollmeier, from The Carnegie Observatories, was selected as SDSS-V Director last spring, and other members of the Management Committee were chosen shortly afterwards. The core projects are now solidifying and the hardware is being prototyped. It’s an exciting (and oh so busy) time! 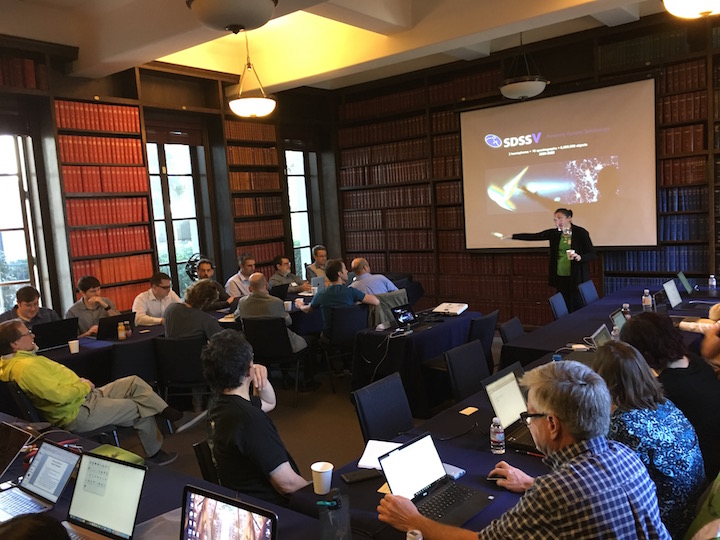 The science and hardware teams listen to Director Kollmeier open the meeting, in the historic library at the Carnegie Observatories in Pasadena, USA.

The team published a description of the project last fall for the astronomical community, which you can find here. In summary, SDSS-V will consist of three “Mappers,” much like how SDSS-IV now consists of eBOSS, MaNGA, and APOGEE-2.

The Milky Way Mapper will observe millions of stars in our Milky Way Galaxy and in its companion Magellanic Clouds, tabulating their motions and their compositions to study how stars form, disperse throughout space, make heavy elements, and die.  The team will also look for the signatures of planets and invisible companions (including black holes) around the stars.  The Local Volume Mapper will measure the strength of light emitted from interstellar gas in the Milky Way, the Magellanic Clouds, the Andromeda Galaxy, and other nearby galaxies.  This emission tells us about how the gas interacts with stars (especially those that are many times the mass of the Sun) as they form and die, and about how the heavy elements that these stars make are transported throughout the galaxy into later generations of stars. The Black Hole Mapper will observe many thousands of galaxy clusters and supermassive black holes in the distant Universe.  Because light from these objects left when the Universe was much younger, we can use these data to “watch” how these objects grow, change, and influence other galaxies across cosmic time. 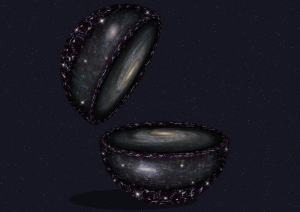 An artist conception of the 3D Universe that SDSS-V will explore. The Earth, in the Milky Way, is at the center, and scientists peer outwards in all directions to measure the light from nearby galaxies and distant black holes. Image Credit: Robin Dienel/OCIS.

One of the classic symbols of SDSS is its “plates” — big disks of aluminum that hold the hand-plugged fiber optic cables up to our 2.5-meter telescopes.  These plates can be thought of as mini maps of the sky, with holes punched through them at the locations of the stars and galaxies we want to observe.  But all of that is changing in SDSS-V, in two major ways.  First, we’re building a couple of small telescopes to add to the ones that already exist, which the Local Volume Mapper will connect directly to six brand-new instruments for taking their measurements.  Second, SDSS-V is replacing its plates with many little robots (500 of ’em!) that are able to position the fiber optic cables anywhere in the focal plane of the telescope.  Unlike fibers plugged into the plates, the robots can move from target to target during an observation, allowing the survey to observe each star, quasar, or galaxy cluster only as long as needed and to be much more efficient.  We’ll miss our beautiful plates, but robots are pretty cool too, right?

All three Mappers will operate instruments in both hemispheres — on SDSS’s trusty 2.5-meter Sloan Telescope at Apache Point Observatory in New Mexico, USA, and on the 2.5-meter du Pont Telescope and the new small telescopes at Las Campanas Observatory in Chile.  (SDSS-IV has already established an important presence at Las Campanas.)  By using both sites, SDSS-V will have a spectroscopic view of the entire sky, because no single place on Earth can see everything.  Even though each Mapper has different science goals, SDSS scientists from all of the Mappers will continue to meet together regularly and share results, because we’re all interested in the same Universe!

SDSS-V can’t happen without the support of member institutions, though.  So if you are (or if you know) an astronomer who wants to be part of making it happen and have early access to the data and the global network of collaborators within SDSS, talk to your chair or director, and let us know how we can help!

2 thoughts on “SDSS-V Is Underway!”