Last week, more than a dozen SDSS IV-midables gathered in St Andrews, Scotland for a very important task: preparing the documentation for the Fourteenth SDSS Data Release.  This information — from high-level overviews of the surveys to column-by-column description of the files — is one of the reasons SDSS is the most highly cited dataset in the history of astronomy.  (Too strong?  No, it’s actually true: Madrid & Macchetto 2006, 2009.)

SDSS holds one of these documentation workshops for every data release: e.g., DocuFeest (DR13), DocuLuau (DR12), DocuGras (DR10), and DocuFiesta (DR9).  As the DR14 incarnation was being held in Scotland, it was dubbed the DocuCeilidh — “Ceilidh” is a Gaelic term for an evening full of traditional music, dancing, and storytelling. 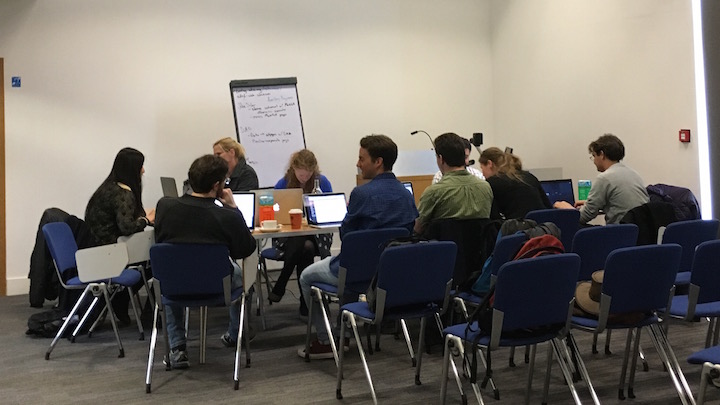 The MaNGA documentation team (plus Bonnie) lay out their plans for the week.

Over four days, the DR14 DocuCeilidh team added or updated 180 webpages and rewrote more than 50 data models.  There were 12 operating Slack channels, meters of emails, and almost non-stop discussion across the tables, even as people ducked in and out of the room to sit on numerous telecons and other meetings. 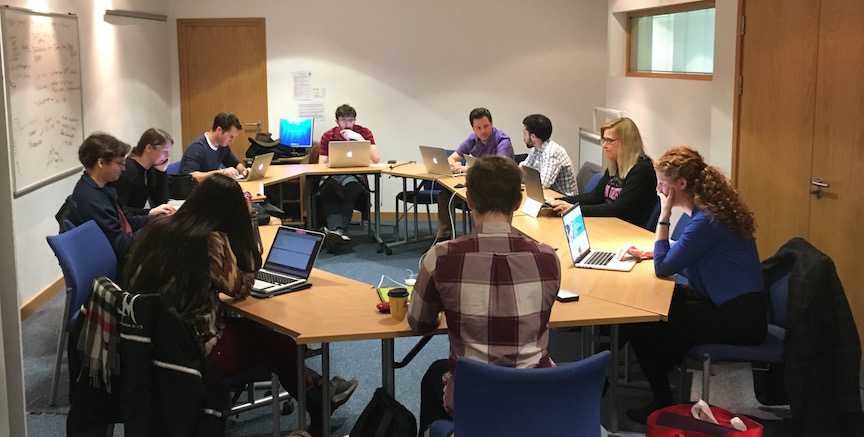 Jordan Raddick, Bonnie Souter, and Joel Brownstein (joining remotely) were kept busy answering technical questions, keeping a schedule, and making sure everyone had a functional platform in which to work.  SDSS-IV Spokesperson Karen Masters made great progress on the DR14 release paper, and also started adding credit lines to all images on the data release site, in advance of switching to a Creative Commons Attribution license for all SDSS images.  And Anne-Marie — in addition to the MaNGA documentation — kept a masterful hand on the organizational details and provided a steady stream of delicious treats to keep everyone fueled. 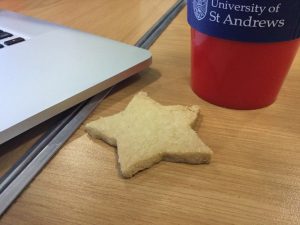 When docuCeilidhing we recommend you eat shortbread.

But even among the many, many person-hours of work put in (over 400, through the week), the Sloanies (of course) found a way to have a good time.  They explored St Andrews’ castle and cathedral ruins, sampled a wide range of Scottish whiskies, and attended a classical concert starring SDSS’s own Dr. Weijmans.  They even engaged in an exhilarating spot of ceilidh dancing, and spent a morning spying on some of the 46,200 nesting pairs of puffins on an island in the Firth of Forth.

Some of the team too a break to climb the St Rule’s Tower in St Andrews Cathedral. 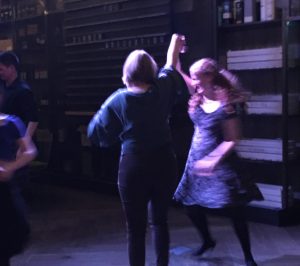 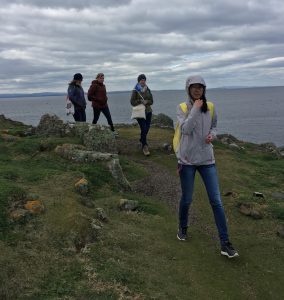 Walking for science on the Isle of May. We saw some Puffins. We went home happy.

DR14 is scheduled for July 31, and while there’s still some work to do before we deliver our latest product to the world, the DocuCeilidh accomplished quite a bit of the legwork for it to be a success.  In the meantime, plans are already in the works for the DR15 DocuTBD…stay tuned!

One thought on “Where there’s a data release, there’s documentation!”