By Kate Meredith.  Kate is the Director of Education Outreach at the University of Chicago Yerkes Observatory.  Kate began working with SDSS data while still a high school science teacher and continued that work in her role with SDSS as lead educator for formal education.  She is the primary developer of the SDSS Voyages website.  In her first year as Education Director at Yerkes, Kate launched a summer intern program.  In this post, Kate describes one of the projects interns lead during the summer of 2016.

Rebecca Chen and Lindsay Berkhout are sophomore physics majors at the University of Chicago. Both chose the astronomy specialization, and both spent the summer of 2016 as interns at Yerkes Observatory . They were two of the 12 undergraduates that helped launch the first ever Yerkes Education Outreach internship program.  Their goal was to take precise photometric measurements of targets (how bright objects are) with instruments including the 24-inch telescope at Yerkes, as well as Stone Edge Observatory’s 20-inch telescope, located in Sonoma, California. 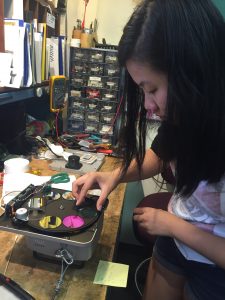 Rebecca Chen positioning new SDSS filters for use with the 24 inch reflecting telescope at Yerkes Observatory.

“We both came in, and we didn’t know anything,” Berkhout laughs. But they soon got up to speed, and ended the summer with a tested methodology that allows not only them, but students following in their footsteps, to use the telescopes to measure the brightness of objects to within 5% the value obtained by the venerable Sloan Digital Sky Survey (SDSS).

The long-term goal on Yerkes’ side is to be able to extend SDSS catalog to bright stars. The survey, designed to measure many faint targets, has gaps when it comes to measuring the brightest stars. But the Yerkes and Stone Edge telescopes—large for small observatories, but tiny compared to SDSS’ 100-inch mirror—can tackle the bright stars with ease. The trick is being able to compare data using the very different instruments of SDSS and the observatory telescopes.Chen and Berkhout were interested in more dramatic events; they wanted to measure the lightcurves of recent supernovae. But both projects rely on being able to precisely measure the brightness of targets. And figuring out how to reliably attain such precision with the Stone Edge and Yerkes telescopes became the students’ summer objective.

Richard Kron, a professor at the University of Chicago and former director of Yerkes Observatory, worked closely with the students. But he says he was mostly there to answer their technical questions, and let them guide the direction of the work themselves—something Chen and Berkhout handled with aplomb, though he notes that other students might desire a more hands-on approach to mentoring.

He introduced the pair to software packages—Aperture Photometry Tool and Topcat—to help them in their work, and advised on details such as calculating uncertainty in their measurements. He admits that his first instinct is often to push through and rush to big results. And students likewise often want to do something novel and exciting—like observing supernovae. 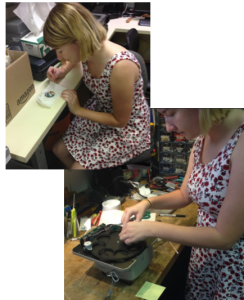 But Kron says it’s important to remember how much time new students take to assimilate the big concepts at play: operating the telescopes, learning new software routines, finding and measuring the targets, understanding uncertainty. “Make sure the student feels really in command,” he suggests. “It’s okay if you don’t cover quite as much as your original dreams had suggested.”

“There’s still a lot of work to do,” Berkhout acknowledges. Steep learning curves, but also telescope downtime, contributed to the sometimes slow pace. “The next step is actually taking data and using this methodology to get results,” she says, something they ran out of time for in the short summer.  “I think that if someone else takes the project they could go wherever they want with it, whether it’s bright stars or variable stars, or supernovae.”
Berkhout and Chen left behind a detailed guide of the work they did, summarizing the technical details of how to take observations, run them through the software, measure sources’ photometry, and compare it to SDSS values. They also left suggestions for ways future interns might improve from 5% down to within 2% of the SDSS values. And they took with them many more lessons in how to plan and tackle such a project.

“I felt like it was a really nice internship for summer after first year,” Berkhout says. “It was a good way to get involved in a research project that taught us a lot so now we can go to other people and be able to say that we’ve done something. That we learned a lot and we’re competent and can be involved in bigger research projects in the future.”

Chen reflects that, “While we were working it was frustrating, because at times it felt like we weren’t getting anywhere. But at the end of the summer, looking back on all the things we had done, I was like, ‘Oh that’s pretty cool. That’s a project. We did a real project.’” 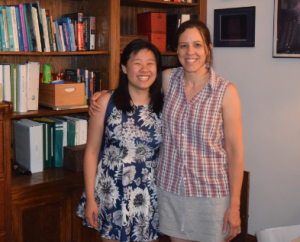