While there have been many recent studies addressing how galaxies shut off, or quench, their star formation, an equally interesting yet relatively unstudied question is how these quenched galaxies remain quenched. This is interesting because these quiescent galaxies often contain gas (from stellar mass loss or mergers) that—if left unimpeded—should cool and form stars. But since we know that quiescent galaxies have not formed a significant amount of stars since they’ve been quenched, there must be something that prevents this gas from cooling.

In the new study by Cheung et al. 2016, Nature, 533, 504, this ‘something’ has been found. Using the ongoing SDSS IV MaNGA survey, which takes resolved spectroscopy for 10,000 nearby galaxies, Cheung et al. discovered a new class of quiescent galaxies—dubbed “red geysers”—that hosts outflowing winds powerful enough to heat ambient gas and suppress future star formation. These winds are manifested in bisymmetric emission features (in H-alpha, [OII], and other strong lines) and are likely powered by their weakly-accreting supermassive black holes.

To highlight the key characteristics of this class, Cheung et al. focus on a prototypical red geyser, which they nicknamed “Akira”—a reference to the critically-acclaimed manga comic of the same name, and in homage to the MaNGA survey and the lead author’s current institute in Japan (Kavli IPMU). Akira is undergoing a minor interaction with another galaxy, which they’ve nicknamed “Tetsuo”—another character in the same manga comic as Akira; the SDSS image of the interaction is shown in panel a of the figure below, which is reproduced from the Cheung et al. 2016. According to merger simulations, Tetsuo is depositing cool gas into Akira, which is detected in redshifted Na D absorption (panels d and e). The expected star-formation from this cool gas, however, is absent: Cheung et al. find that the measured star-formation rate of Akira is much lower than what is expected given the amount of cold gas present. Thus something is prohibiting star formation in Akira—what is it? 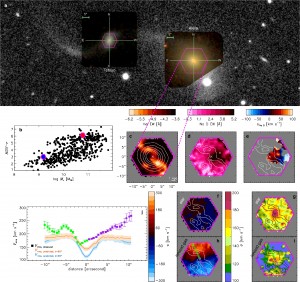 The images and diagnostic diagrams of “Akira”, a prototypical red geyser.

Ruling out the disk interpretation, Cheung et al. developed a qualitative wind model that reproduces many of the features of the data, including the ionized gas velocity field and the ionized gas velocity dispersion field. They theorize that this outflowing wind is likely powered by the weakly-accreting supermassive black hole at the center of Akira, which is detected as a central radio point source in the FIRST survey and in followup Jansky VLA observations. They calculate that the energetic output from this low-luminosity active galactic nuclei (AGN) is sufficient to power this outflowing wind, which in turn, has enough energy to counterbalance the cooling of both the warm and cool gas within Akira, and thereby suppress star formation.

While Akira is an ideal case-study, perhaps the most exciting aspect of this study is the fact that there are many more red geysers. Red geysers make up about 10% of quiescent galaxies at moderate stellar masses (2×1010 solar masses), which could have important implications on the duty cycle of this kind of supermassive black hole feedback. Moreover, because they are relatively common, red geysers may exemplify how typical quiescent galaxies maintain their quiescence.