The following is a synopsis of the new overview paper describing the APOGEE survey. You can find the full paper here.

The first thing to show you about this paper is its authors list. Check out how many contributors there are to this survey:

This, together with its length (50 pages) and number of figures (38!!) may give you some idea of the huge scope of the project. To help us sift through it, here is the executive summary, from the APOGEE Principal Investigator, Steven Majewski:

“This paper gives a broad overview of the motivations, design and execution of the APOGEE survey — a synopsis of how the survey was structured and why.”

This isn’t just a technical overview of the survey, however. Says Majewski:

“The most fun part of this new overview paper — a part for which the entire APOGEE team can be justly proud — is the summary of what the project managed to accomplish in such a relatively short amount of time.”

Here are some examples of what he means:

It should be mentioned that APOGEE was made possible by a unique 300-fiber-fed, high resolution spectrograph working in the infrared H-band. Hence, thirteen technical papers, while a seemingly large number, were all necessary because APOGEE truly broke ground in a number of ways, both scientific and technical. The actual construction was accomplished by the APOGEE instrument team led by John Wilson (Instrument Scientist) and Fred Hearty (Project Manager).

The detailed maps mentioned in the last bullet deserve a couple of images — they’re too cool not to show. In Figure 24 from the paper, the velocities of stars relative to the Sun are shown against an artist’s impression of the Milky Way Galaxy. Notice how there are clear areas where stars are approaching us, co-moving with us, and moving away from us: 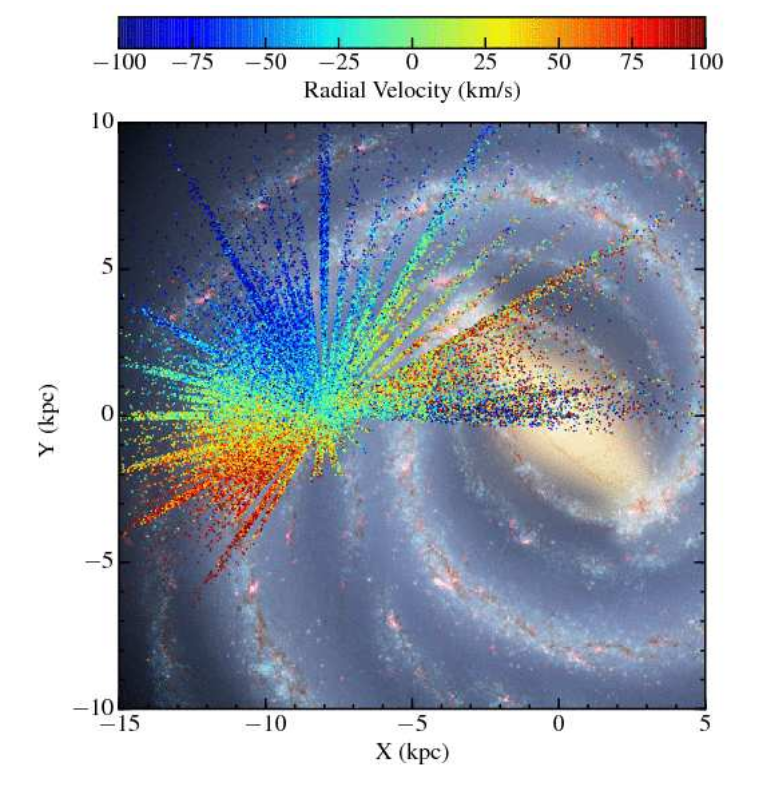 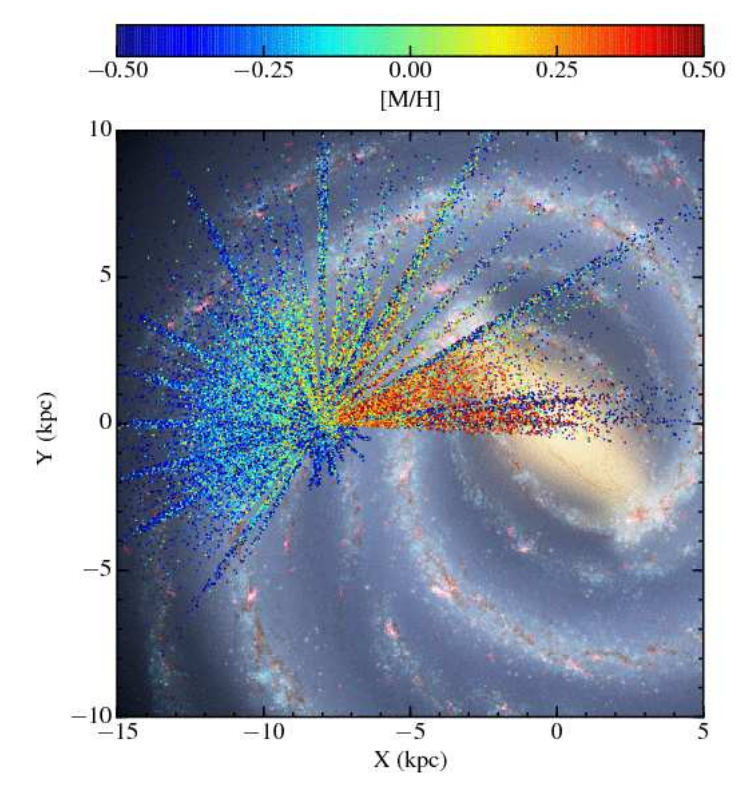 The general trends shown here are not new; instead, it is APOGEE’s unprecedented detail that makes it the biggest kid on the Galactic evolution block. To put APOGEE into context for us, here is Ricardo Schiavon, the APOGEE Survey Scientist, to sum it up:

“APOGEE has, for the first time, provided a homogeneous database of high quality, high resolution infrared spectra for 150,000 stars, which together offer a rigorously systematic spectroscopic census of our home galaxy. Because of it’s unique infrared sensitivity and ability to punch through the blankets of obscuring Galactic dust in its most crowded regions, APOGEE is unveiling the chemical and kinematical properties of stars in parts of the Milky Way never before probed in such exquisite detail. It is a groundbreaking experiment.”

To put it more bluntly: no one has ever done an infrared survey of Milky Way stars in this way.