The spotlight this month is on Jonathan Bird, the Vanderbilt Initiative for Data-Intensive Astrophysics Postdoc (VIDA) at Vanderbilt University. He is also the APOGEE-2 Science co-chair, for which he is responsible of “making sure that APOGEE-2 takes full advantage of the truly ground-breaking dataset the survey has produced.”

Jonathan is fascinated by the structure of the Milky Way Galaxy: Why is it shaped this way? What was it like in the past? And what will it be like in the future? 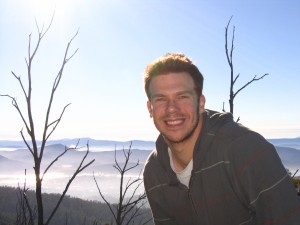 Like many people, Jonathan developed a love for astronomy from an early age. His family home in the Santa Monica mountains offered beautiful views of the night sky.

But growing up, his real passion was basketball. He travelled extensively across the west and southwest for tournaments in high school, and was lucky enough to play college ‘ball when he arrived at Caltech — a team in need of little introduction.

Jonathan’s scientific interests have been widespread. Studying radio waves to investigate what determines the large-scale morphology of galaxies; using Cepheid variable stars to measure distances to galaxies; studying Asymptotic Giant Branch stars in order to understand their contribution to stellar synthesis models, a major component of galaxy models; and studying how a disk galaxy is assembled from smaller galaxies. Do you see a theme? In fact, Jonathan’s major interests can best be described by his PhD thesis title: “The Formation and Evolution of Disk Galaxies.” Jonathan’s goal is nothing less than understanding how the Milky Way came to be, how it evolved, and where it is going from here.

Perhaps that is why Jonathan fits in so well with the APOGEE team.

Let’s show one of Jonathan’s models from his 2013 paper on disk galaxy assembly. In the top left panel is shown the distribution of really old stars (11-12 billion years old) in a typical spiral galaxy. From left to right, and then continuing on the bottom, each panel shows the distribution of stars in a different age group (numbers in the bottom right of each panel show the age in billions of years). Notice that the “spiral” shape that we associate with spiral galaxies is found only among stars that are less than about 2 billion years old. As odd as this may seem, this is exactly what astronomers observe: the older stars are found across a large volume across the bulge and halo; whereas younger stars are predominantly found in the disk, where star formation is ongoing. 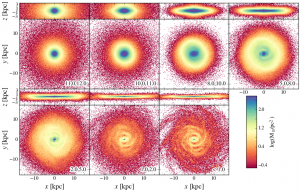 How does this model hold up against the huge APOGEE-1 dataset? Pretty well, actually. For Jonathan, this is heartening — we have begun to piece together the massively complex stellar history of the Milky Way Galaxy, and we can do it with state-of-the-art telescopes and computer codes. You can follow more about what Jonathan is doing, along with the rest of the APOGEE-2 team, by following us on social media.