The first conference on Inclusive Astronomy was held June 17-19, 2015 at Vanderbilt University in Nashville, TN.  The conference brought together professional astronomers, sociologists, education researchers, and experts on social justice, with the aim of collectively defining recommendations and actions to make the astronomical community more diverse and inclusive.  We are proud to note that the local organizing committee for Inclusive Astronomy included members of the SDSS-IV leadership: Keivan Stassun and Kelly Holley-Bockelmann of Vanderbilt University.

Britt Lundgren (UW-Madison), who co-Chaired last year’s Committee on the Participation of Women in the SDSS (CPWS) with Karen Kinemuchi (Apache Point Observatory), presented a poster on the 2014 SDSS-IV Demographics Report.  This report details the results of a voluntary survey of the SDSS-IV collaboration’s ~500 active members, and an analysis of the SDSS-IV membership and leadership in terms of gender, location, career stage, and minority status.   The report was recently accepted for publication in the August 2015 edition of the Publications of the Astronomical Society of the Pacific, and the full text of the report is currently publicly available on the arXiv. 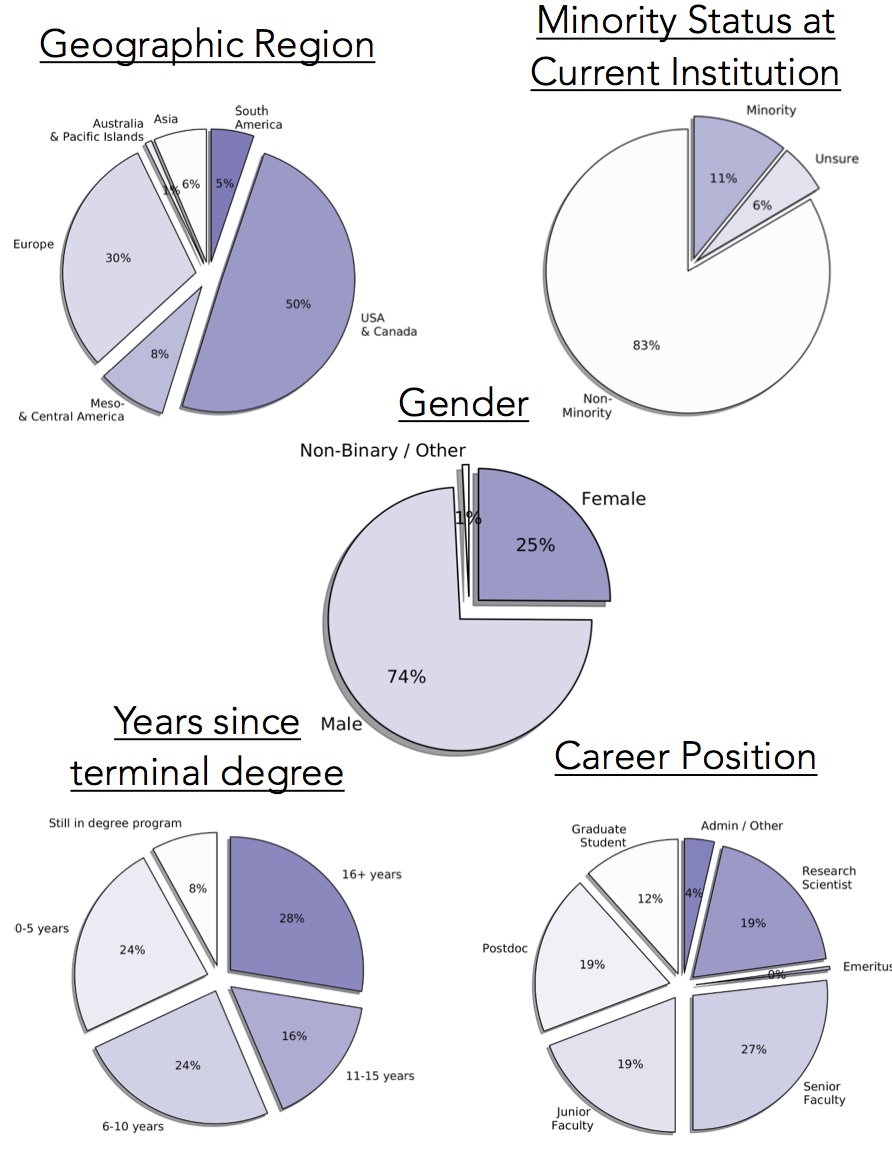 (Above: The basic demographic breakdown of the 250 SDSS-IV collaboration members who responded to the CPWS survey in 2014.)

Key findings from the 2014 SDSS-IV demographic report include:

The efforts undertaken by the CPWS to address the demographics of the membership and leadership of SDSS-IV were very positively received at the Inclusive Astronomy conference. In addition, members of the leadership of LSST and DES in attendance voiced interest in producing similar reports from their collaborations, which will be among the largest in astronomy in coming years.   As a growing number of astronomers are participating in large international scientific collaborations, the CPWS is delighted to see other collaborations pursuing a similar accounting to ensure that these structures foster a healthy scientific climate that is both inclusive and diverse.

The 2014 SDSS-IV Demographics Report will provide a baseline for tracking changes within the makeup of the collaboration throughout the lifetime of the SDSS-IV.  This year’s CPWS, co-Chaired by Sara Lucatello (INAF) and Aleks Diamond-Stanic (UW-Madison), recently produced a follow-up survey for 2015, which broadened the demographics investigation to a larger range of diversity metrics (e.g., LGBT, disability, and partnership / family status).  The 2015 survey achieved a ~40% higher participation rate compared to 2014, with 352 members of the collaboration responding.

A summary of the initial results from the 2015 survey will be presented at the SDSS-IV Collaboration Meeting in Madrid later this month, so stay tuned!

One thought on “SDSS-IV Demographics Report Presented at Inclusive Astronomy”