“The nitrogen in our DNA, the calcium in our teeth, the iron in our blood, the carbon in our apple pies were made in the interiors of collapsing stars. We are made of starstuff.” — Carl Sagan

This is an evocative statement. It gets at the heart of the matter. However, it leaves out all the different ways that stars make the elements. It is not just collapsing stars, it is merging stars, burping stars, exploding stars, and the start of the Universe itself.

Below is the latest version of an evolving periodic table color-coded by the origin of the elements in the Solar System. An original version of this was made by Inese Ivans and me in 2008 and refined and improved by Anna Frebel. Versions highlighting different aspects of the physical processes are available on Inese Ivans’ website. 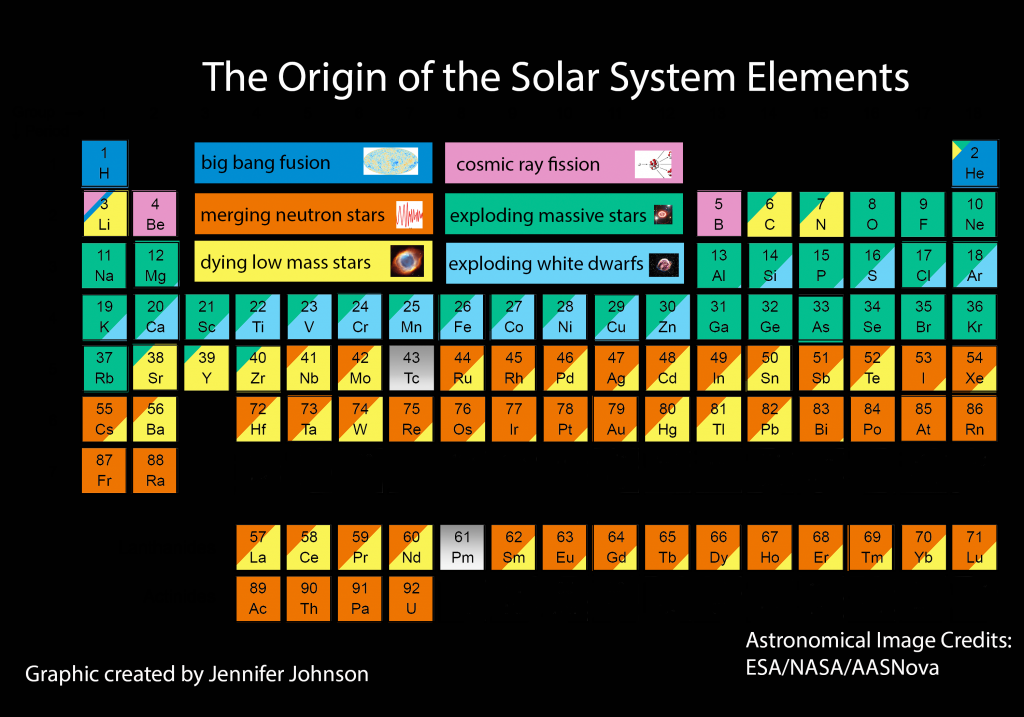 My current version of the periodic table, color-coded by the source of the element in the solar system. Elements with more than one source have the approximate amount due to each process indicated by the amount of area. Tc, Pm, and the elements beyond U do not have long-lived or stable isotopes. I have ignored the elements beyond U in this plot, but not including Tc and Pm looked weird, so I have included them in grey.

For this version, I tried to avoid the technical terms and jargon used in the original plot. I also updated the sources of the heavy elements to reflect the current semi-consensus. This graphic draws on an enormous amount of labor from astronomers and physicists. In an upcoming blog post, I will give details on my sources and assumptions for interested parties. Note that this is for the solar system. There will be additional versions showing what this plot would look like if you were in the early Universe, or if you consider the origin of the elements on the Earth, etc.

However, the main point of this blog post is to present the chart and address the following question:

Why does your version have different information than the well-known Wikipedia entry?

Here is a discussion of the some of the differences between the Wikipedia version and mine. In many cases, the Wikipedia graphic is presenting information that is flat-out wrong. I am trying to avoid going into all details in this single blog post. The underlined phrases below represent possible topics for future blog posts where I (or colleagues I ask) can go into more in more detail later, including why we think we are on the right track.

Backing this statement up with actual evidence may be the basis for a future blog post. Please let me know in comments if you are interested in a blog post on a particular subject.

The Source of it all

Here is the original version, done with markers: 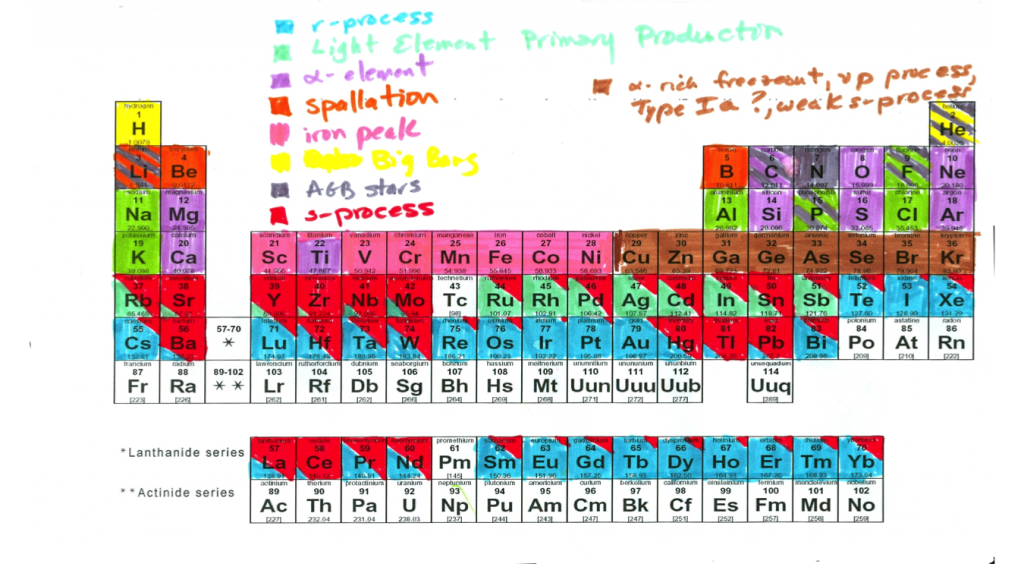 This is what happens when you give two astronomers who are tired of reminding everyone about which elements go with which process a periodic table, a set of markers, and time when they should have been listening to talks. A heartful thanks to Inese Ivans for coming up with this idea.

68 thoughts on “Origin of the Elements in the Solar System”