At the end of June 2016, over 150 members of the SDSS collaboration met for workshops, talks, discussions, and fun by the lake at the University of Wisconsin, Madison. The week began with a two-day APOGEE workshop on Saturday and Sunday. On Sunday, the APOGEEans were joined in Madison by the FAST/REU bootcamp and the Plate workshop for teachers and scientists. 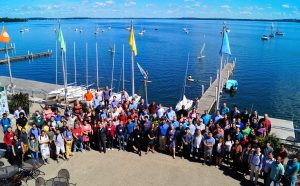 2016 SDSS collaboration meeting photograph. The happy attendees gathered by the beautiful lake. If you were there and not in this picture, you were probably getting coffee.

The FAST/REU students were getting up to speed really quickly on how to work with our data. The REU students are undergraduates who will be working on a science project over the summer, while the FAST students are graduate students in longer term teams with SDSS as we seek to help raise the participation of under-represented minorities.

On Monday-Wednesday, the meeting focused on discussions of SDSS-IV science, including many exciting results from the MaNGA survey, which is releasing its first data in Data Release 13. The APOGEE-2 survey present maps of the composition of stars across the Galaxy, characterizing the trends with position. The eBOSS survey showed the first results for large-scale structure of the Universe based on the 2014-2016 observations (very fast turn-around!). Quasars were also a big topic of conversation, as SDSS is now studying their evolution in detail. We are interested both in how they change over a few years time and mapping how they “grow” the supermassive black holes over billions of years. Results discussed that have been highlighted by SDSS in press releases/blog posts include the shutting off of star formation in galaxies by Edmond Cheng , additional examples of “changing look quasars” by Jessie Runnoe and the discovery that brown dwarfs could be quite common around certain types of stars by Nick Troup. 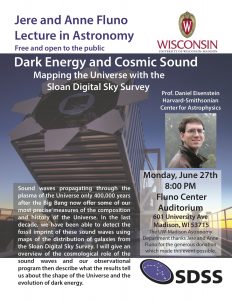 We saw ways that other galaxies could “quench” their star formation in the presentation by Francesco Belfiore and could study the history of star formation in our Galaxy thanks to age maps by Melissa Ness. Apparently our galaxy has some similarities to other spiral galaxies! We tweeted a whole bunch about about the science results and will Storify some of our most popular tweets soon.

On Tuesday night, we had the collaboration meeting banquet, where we honored Dan Long, longtime Sloanie who worked at Apache Point Observatory for over 20 years, including as Chief Telescope Engineer for the Sloan Foundation Telescope. He is retiring next year and, as the email from Jim Gunn put it, “we will miss him more than I can say.” In addition to spoken tributes, we also showed of a movie of some of Dan’s greatest hits and well-wishes from the many other Sloanies. We will be posting that to youtube soon, so stay tuned.

The SDSS collaboration is big and includes people from many career stages, institutions, and cultures. We take the opportunity of these meetings to discuss how the collaboration is working and what we can do better. There was a thoughtful and thought-provoking discussion of how to improve the climate in SDSS and how to establish a “Code of Conduct” that will work to ensure that all are treated with respect.

This meeting also featured our first public talk by Daniel Eisenstein, talking about using the disturbances that sound waves left in the gas of the early Universe to trace the shape, past, and future of the Universe. He’s been working with SDSS data on this subject for over 10 years, so is a leading expert in this amazing result. The April 2016 edition of Sky and Telescope featured the article “Mapping the Universe’s Ancient Sound Waves” written by Daniel. The “Beyond the Pages” addition by the editors is also wonderful.

We had our most ambitious meeting ever for education and public outreach. The Plate Workshop on how to use an SDSS plate to introduce your class to the science of SDSS had a number of educators from across the US attending, looking pretty happy when they got their picture taken. 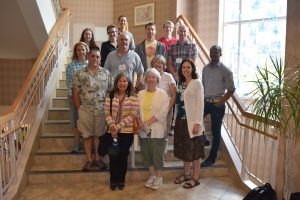 Educators from the Plate Workshop, organized by Kate Meredith (bottom right) and Karen Masters (who is probably taking the picture)

The Sunday workshop was followed on Monday and Tuesday by educators attending science talks, working with SDSS scientists on education and public outreach ideas, and doing an “EPO Hack Day” to create new activities for Voyages, SDSS’s website for how to use our data for education for K-12 students.

Thanks to the University of Wisconsin, especially the head of the Local Organizing Committee, Christy Tremonti, for hosting such a lovely meeting and we look forward to seeing everyone at the next meeting next summer.